RÚe, Jonathan I See a Voice

I See a Voice 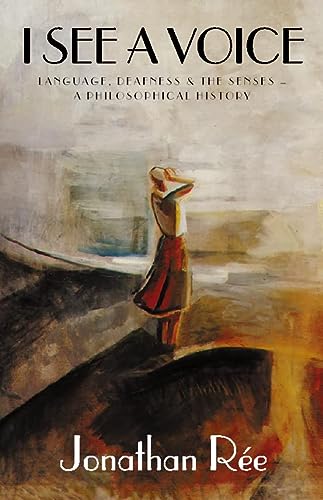 I See a Voice is the stunning debut of Jonathan Rée, the Simon Schama of philosophy.

What is so special about the human voice?

The relationship between the ear and the voice is unique among the senses. While we cannot emit light or smell or flavour at will, we control, unconsciously or consciously, the sounds that come from our mouths.

Many thinkers, most notably Freud, have seen the voice as the outward expression of the soul. Careful listening to the voices of others, it was felt, would lay bare your innermost fears and desires.

Given such an intimate connection between hearing and speaking, what has been the fate of those born deaf? How have they found ways of communicating? Rée’s book uses fable and anecdote to examine the extraordinary treatment through the ages of the mute in Western culture.

In doing so he uncovers some wonderful stories: the conflict between those who used sign language and who sought a deaf homeland and the ‘oralists’ of Britain and Germany, who believed that the deaf should be integrated into society by being taught how to speak.

Rée spins these observations and stories into a rich fabric to create a new genre: philosophical history, which is neither a philosophy of what history is, nor a history of ideas. Rather, it attempts to write history from an accessibly philosophical point of view. Rée succeeds in this endeavour beautifully.

'I SEE A VOICE' Jonathan Ree
Language, deafness and the senses -a philosophical history

What's in a voice? Singing or talking, coaxing or ranting, whispering or chortling, the textures and tones of our voices are telling revelations of our individual personalities and moods. But there is nothing more political than the voice of the people; nothing more religious than the voice of God; nothing more unsettling than the voice of conscience. The voice is a many-layered phenomenon, enfolding within itself all the great themes of traditional philosophical reflection: nature and culture, reason and experience, transience and eternity, sincerity and duplicity, art and technique, truth and delusion, selfhood and annihilation, history and tradition, life and death.

'I SEE A VOICE' escorts its readers on a vast and eventful intellectual journey, taking in colour music and voice machines, shorthand and phonetics, Egyptian hieroglyphs, dance notations, and the origins of language, the division of the rainbow and the development of the music scale, Proust and Dickens, structuralism and phenomenology, talking parrots and silent films. Above all it tells the painful story of those who have literally no voice: the so-called 'deaf and dumb', whose inability to speak has usually been treated by the hearing world as proof that they are entirely unreasonable and probably less than human. And in a 'tour de force' of historical narration, Jonathan Ree reconstructs the historical plight of the deaf and the tortuous progress of deaf education.

At every turn of the story we run into a curious clutch of doctrines about the five senses, especially the differences between hearing and sight. These doctrines belong to common sense, but they have also been elaborated by the great philosophers from Plato and Aristotle to Kant and Heidegger. They are intricately entwined with our entire experience of the world, and yet – as Ree demonstrates with vividness and lucidity – they distort and deform it as well.

'I SEE A VOICE' teems with passion and patience, comedy and seriousness, sustained conceptual argument and diverting human anecdote. It is a new departure in philosophy, history, and a challenge of delights to its readers.

1. I SEE A VOICE: A PHILOSOPHICAL HISTORY OF LANGUAGE, DEAFNESS AND THE SENSES

2. I SEE A VOICE: A PHILOSOPHICAL HISTORY OF LANGUAGE, DEAFNESS AND THE SENSES [Hardcover] Ree, Jonathan