Barrett, Andrea Servants of the Map

Servants of the Map 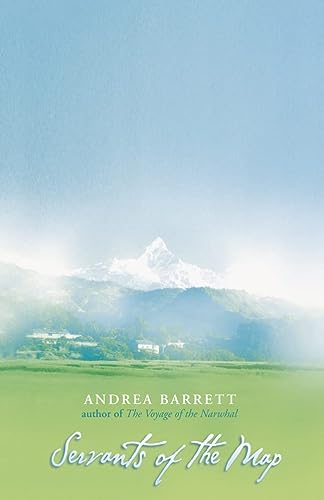 ‘Servants of the Map confirms how deserving Barrett is to be ranked with Alice Munro and the other great North American storytellers of the moment... It is the precision of her words, and the intelligence with which she creates bonds between characters from an age so different from our own, that makes reading her such a joy.’ Economist

‘Andrea Barrett has a talent for reaching to the essence of experience... The passage in which Lavinia speaks of what makes her happy is as poignant and intense as anything I can remember reading for a long time, as radiantly illuminating, in its way, as the famous passage in Wuthering Heights when Catherine describes her idea of perfect weather.’ Barry Unsworth

'Gorgeous, illuminating, entrancing fiction... The scientific themes that made Barrett's novel The Voyage of the Narwhal and her NBA-winning collection Ship Fever two of the most unusual literary successes of their decade again predominate in this superb new gathering of four stories and two novellas.' (Starred) Kirkus Reviews

‘Spellbinding....Complex yet ravishing tales of scientific pursuits stoked by loneliness and desire.’ Booklist

'Barrett's rapidly growing reputation as one of the finest writers at work today will assure a substantial audience for this radiant collection... Familiar figures appear and reappear in more than one story, and many readers will be able to make connections between these tales and Barrett's earlier works. Yet each is rich and independent and beautiful and should draw Barrett many new admirers.' Publishers Weekly

‘A wonderful clarity and ease, the serene authority of a writer working at the very height of her powers.’ Michiko Kakutani, New York Times

A national bestseller in the US – another magnificently imagined and executed book of historical fiction with a contemporary twist, from one of the masters of the form. ‘These stories possess a wonderful clarity and ease, the serene authority of a writer working at the very height of her powers.' New York Times

Ranging across two centuries, and from the western Himalayas to an Adirondack village, Servants of the Map travels the territories of yearning and awakening, of loss and unexpected discovery.

A mapper of the highest mountain peaks, engaged on the trigonometrical measurement of British India, realizes his true obsession while in deflationary correspondence with his far-off wife. A young woman afire with scientific curiosity must come to terms with a romantic fantasy. Brothers and sisters, torn apart at an early age, are beset by dreams of reunion. Throughout, Barrett’s most characteristic theme – the happenings in that borderland between science and desire – unfolds in the diverse lives of unforgettable human beings.

1. Servants of the Map