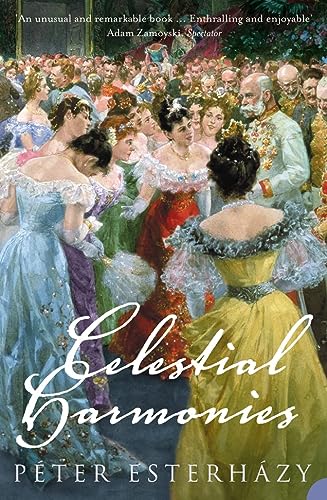 ‘Esterhazy’s writing is agile and compelling ... The polyform narration is fascinating in its ambition, its effect rather like a literary one-man band.’ TLS

‘This novel is an agility class. But it doesn’t seem to matter if the reader is not very agile. All one needs to enjoy it is enough time and a certain willingness to step along with a very dancing sort of writer.’ Independent

A biographical novel in the grand European literary tradition that spans multiple generations and three centuries of tumultuous Central European history, as witnessed by the Esterhazys, a leading Hungarian family.

The Esterhazys, one of Europe's most prominent aristocratic families, are indelibly inscribed in the history of the Hapsburg Empire. Having gone through epic conquest, tragedy, triumph and near destruction, the Esterhazy family lore is rich, poignant, entertaining and awe-inspiring. ‘Celestial Harmonies’ is a national epic in the form of fiction, which Esterhazy writes by reinventing the traditional form of the dynastic saga.

Beginning with short sections narrated in the first person, ‘Celestial Harmonies’ recounts legends, inventions and episodes that form a mosaic in which chronology is abandoned and only one prominent figure exists: 'My Father'. The character of 'My Father' is a Don Juan, a profligate, a tycoon and a scholar, a bishop, an architect, a madman and a tyrant, an envoy and a premier, a student of Helmholtz and the cat in Schrodinger's experiment. He stands for each and every family member, functioning as a mount for simply everything, a man as unlimited and inexhaustible as the power born by the book's fictional family.

‘Celestial Harmonies’ is a rich, dazzlingly original exploration of the emotional ties that bind men to their fathers, bonds that stand outside time, place and history. Old world glamour meets harsh post-war reality in a novel that touches on all aspects of life and philosophy relevant to us today – the nature of dictatorship, love, hate and family relationships, to meditations on betrayal, God and Christianity.