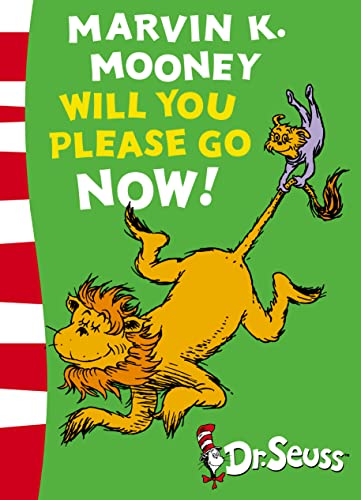 Some people just won't take the hint when it's time to go to bed, but Marvin K. Mooney eventually gets the message! This fun tale by Dr. Seuss will delight young readers and remind them that they sometimes have to do what they are told! This delightful book forms part of the second stage in HarperCollins' major Dr., Seuss rebrand programme. With the relaunch of 10 more titles in August 2003, such all-time favourites as `How the Grinch Stole Christmas!', `Mr. Brown Can Moo! Can You?' and `Dr., Seuss's Sleep Book' boast bright new covers that incorporate much-needed guidance on reading levels: Blue Back Books are for parents to share with young children, Green Back Books are for budding readers to tackle on their own, and Yellow Back Books are for older, more fluent readers to enjoy. `Marvin K. Mooney will you Please Go Now!' belongs to the Green Back Book range.

Praise for Dr. Seuss:
“[Dr. Seuss] has...instilled a lifelong love of books, learning and reading [in children]” The Telegraph

“Dr. Seuss ignites a child’s imagination with his mischievous characters and zany verses” The Express

“The magic of Dr. Seuss, with his hilarious rhymes, belongs on the family bookshelf” Sunday Times Magazine

“The author... has filled many a childhood with unforgettable characters, stunning illustrations, and of course, glorious rhyme” The Guardian

Praise for And To Think That I Saw it On Mulberry Street:
“The cleverest book I have met with for many years. The swing and merriment of the pictures and the natural truthful simplicity of the untruthfulness.”
Beatrix Potter, author of The Tale of Peter Rabbit

Theodor Seuss Geisel – better known to his millions of fans as Dr. Seuss – was born the son of a park superintendent in Springfield, Massachusetts, in 1904. After studying at Dartmouth College, New Hampshire, and later at Oxford University in England, he became a magazine humorist and cartoonist, and an advertising man. He soon turned his many talents to writing children’s books, and his first book – ‘And to Think That I Saw It on Mulberry Street’ – was published in 1937. His greatest claim to fame was the one and only ‘The Cat in the Hat’, published in 1957, the first of a successful range of early learning books known as Beginner Books.

1. Marvin K.Mooney Will You Please Go Now! Green Back Book

2. Marvin K.Mooney Will You Please Go Now! Green Back Book

3. MARVIN K.MOONEY WILL YOU PLEASE

4. MARVIN K.MOONEY WILL YOU PLEASE