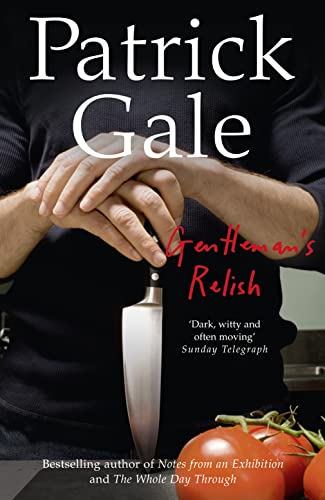 ‘Dark, witty and often obliquely moving, these are tales of difficult fathers and gay sons, of lonely wives and random or deliberate acts of violence ... Gale is interested in power and the lack of it and his stories pull the reader in unexpected ways, offering worlds that are far from certain and where love or its absence can never be predicted'
CAROL ANN DUFFY, Sunday Telegraph

'The short story form suits Gale's ability to zoom in on the smallest nuances of a relationship'
KATE SAUNDERS, Times

'The stories confirm Gale's ability to exploit the short story genre's capacity to deliver a caffeinated hit ... [they] showcase his capacity for combining a light touch and a macabre sense of humour with an understated strength of human feeling'
Metro

'Gale's writing is sharply evocative ...[he] writes with such humanity and warmth in his novels that it comes as a surprise that these short stories are told in a different, darker voice'
CARLA MCKAY, Daily Mail

'Gentleman's Relish is a hugely enjoyable collection which proves that the short story is still very much alive ... Gale has a distinctive sense of humour and it is not unusual for something sinister to be lurking beneath the apparently unruffled and genteel surface of his narrative ... the stories in Gentleman's Relish adroitly utilise carefully observed details as the background to events that cause the reader to give a delicious shudder of horror at story's end'
PETER BURTON, Daily Express

'It provides further evidence of Gale's stylistic deftness, insight and wonderfully eclectic range of interests ... Even as rural life and perspectives dominate, other stories consistently tease out fresh territory... worth every penny'
RICHARD CANNING, Independent

‘Vivid, believable characters ... Gale has a light touch with social commentary but the undertones are often menacing'
Times Literary Supplement

An exhilarating new collection of stories by the author of Richard & Judy-bestseller ‘Notes from an Exhibition’, combining wit and poignancy to illuminate experiences both common and uncommon.

Love (and loathing) within families is dissected – a father makes an unexpected discovery about his son which is too hard for him to cope with. A son wreaks revenge through the power of cookery. Three generations of the same family gain freedom through the years in a once-despised caravan. A bored wife finds happiness when an old lag teaches her the art of angling. A dog-training lesson with a puppy who hasn’t grasped the meaning of ‘obedience’ leads to the discovery of a murder.

Here too are music and silence – the sweetness and sadness of festivals, of the Church and of the control exercised by those in charge in small communities.

This tremendously enjoyable collection of stories has the same wit, tenderness and acute psychological observation as Gale’s bestselling novels, including NOTES FROM AN EXHIBITION and the recent THE WHOLE DAY THROUGH. For Gale's many fans, GENTLEMAN’S RELISH is certain to be a real treat.