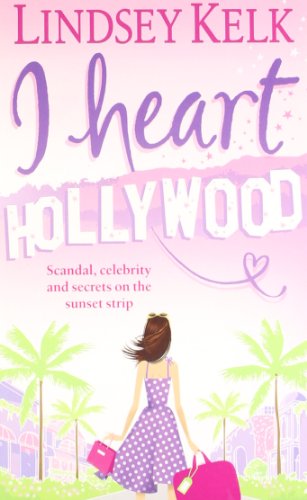 Angela Clark fell head over heels for New York, but will the sun-drenched glamour of Hollywood win her heart?

Angela Clark can’t believe her luck... she’s an English girl living in New York with a dream job at hip magazine The Look and a sexy boyfriend.

Her latest assignment takes her to Hollywood to interview hot actor and fellow Brit James Jacobs.Thrown in at the deep end she heads west with best friend Jenny dreaming of Rodeo Drive and Malibu beach.

Soon Angela discovers that celebrity life in Hollywood is not all glamour, gloss and sunshine. Despite his lady-killer reputation, the only person who seems genuine is James.

Then a paparazzi snaps them in an uncompromising position and suddenly Angela is thrust into the spotlight for all the wrong reasons...

Can she convince all those close to her – especially her boss and her boyfriend – not to believe everything they read? And will Hollywood ever win Angela’s heart?

Lindsey Kelk has been writing since she was six, when she read all the books in her room and decided that the only course of action was to write a new one.The Adventures of Tellina theTeddy was tragically never published.Twenty-two years later, she works as a children’s book editor in London so that no one else has to resort to such drastic action. When she isn’t writing, reading or watching more TV than is healthy, Lindsey likes to wear shoes, shop for shoes and judge the shoes of others.

Buchbeschreibung Harper, 2010. Paperback. Zustand: Used; Good. Dispatched, from the UK, within 48 hours of ordering. This book is in good condition but will show signs of previous ownership. Please expect some creasing to the spine and/or minor damage to the cover. Damaged cover. The cover of is slightly damaged for instance a torn or bent corner. Bestandsnummer des Verkäufers CHL6353910

6. I heart Hollywood. Scandal, celbrity and secrets on the sunset strip. Paperback