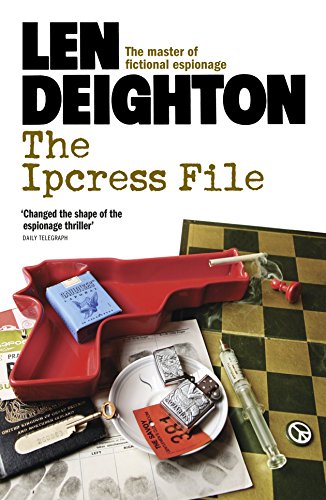 Len Deighton's classic first novel, whoseprotagonist is a nameless spy - later christened Harry Palmer and made famous worldwide in the iconic 1960s film starring Michael Caine. The Ipcress File was not only Len Deighton's first novel, it was his first bestseller and the book that broke the mould of thriller writing. For the working class narrator, an apparently straightforward mission to find a missing biochemist becomes a journey to the heart of a dark and deadly conspiracy., The film of The Ipcress File gave Michael Caine one of his first and still most celebrated starring roles, while the novel itself has become a classic.

‘A spy story with a difference.’ Observer

‘The poet of the spy story.’ Sunday Times

‘The Ipcress File helped change the shape of the espionage thriller...the prose is still as crisp and fresh as ever...there is an infectious energy about this book which makes it a joy to read, or re-read.’ Daily Telegraph

‘Regarded as the cold war spy thriller that made all subsequent examples of the genre possible...however much of a classic the film is, the book is a completely different proposition. It’s more intricate and far superior...a must for anyone who likes this kind of fiction.’ Loaded

Born in London, he served in the RAF before graduating from the Royal College of Art (which recently elected him a Senior Fellow). While in New York City working as a magazine illustrator he began writing his first novel, ‘The Ipcress File’, which was published in 1962. He is now the author of more than thirty books of fiction and non-fiction. At present living in Europe, he has, over the years, lived with his family in ten different countries from Austria to Portugal.