Verwandte Artikel zu The Peregrine: The Hill of Summer & Diaries

Baker, J A The Peregrine: The Hill of Summer & Diaries

The Peregrine: The Hill of Summer & Diaries 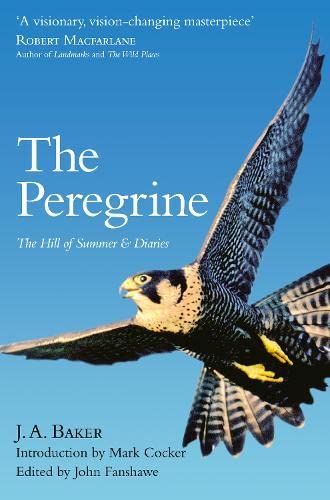 Reissue of J. A. Baker's extraordinary classic of British nature writingDespite the association of peregrines with the wild, outer reaches of the British Isles, The Peregrine is set on the flat marshes of the Essex coast, where J A Baker spent a long winter looking and writing about the visitors from the uplands - peregrines that spend the winter hunting the huge flocks of pigeons and waders that share the desolate landscape with them.Including original diaries from which The Peregrine was written and its companion volume The Hill of Summer, this is a beautiful compendium of lyrical nature writing at its absolute best., Such luminaries as Richard Mabey, Robert Macfarlane, Ted Hughes and Andrew Motion have cited this as one of the most important books in 20th Century nature writing, and the bestselling author Mark Cocker has provided an introduction on the importance of Baker, his writings and the diaries - creating the essential volume of Baker's writings.Papers, maps, and letters have recently come to light which in turn provide a little more background into J A Baker's history. Contemporaries - particularly from his time at school in Chelmsford - have provided insights, remembering a school friend who clearly made an impact on his generation.Among fragments of letters to Baker was one from a reader who praised a piece that Baker had written in RSPB Birds magazine in 1971. Apart from a paper on peregrines which Baker wrote for the Essex Bird Report, this article - entitled On the Essex Coast - appears to be his only other published piece of writing, and, with the agreement of the RSPB, it has been included in this updated new paperback edition of Baker's astounding work.

‘A visionary, vision-changing masterpiece; a book that, once read, will never release its grip upon you.’ Robert Macfarlane, Author of Landmarks and The Wild Places

‘...an inspiring example to future writers, and a gift to lovers of nature.’ The Times Literary Supplement

‘... a literary masterpiece, one of the 20th century’s outstanding examples of nature writing.’ Independent

‘... some of the most marvellous prose of the twentieth century.’ Literary Review

‘A tour de force ... what can I do except praise writing which involves all the senses? This book goes altogether outside the bird-book into literature.’ The Sunday Times

‘A rapt and remarkable book ... his phrases have a magnesium-flare intensity.’ Observer

‘... what is certain is that The Peregrine is the most precise and poetic account of a bird – possibly of any non-human creature – ever written in English prose.’ Daily Telegraph

‘J. A. Baker's poetic prose has a hard intensity and an exquisite lyric grace that takes it far beyond the stereotypical stuff of larks ascending and questing voles. Cruelly beautiful and brutally exact, it sees the countryside anew to give us nature in the wild and in the raw.’ The Scotsman

‘Including original diaries from which The Peregrine was written and its companion volume, The Hill of Summer, this is a beautiful compendium of lyrical nature writing at its absolute best [...]. For those with an interest in the Peregrine Falcon or classic natural history writing. ‘ Guardian

6. The Peregrine: The Hill of Summer & Diaries: the Complete Works of J. A. Baker

8. The Peregrine: The Hill of Summer & Diaries: the Complete Works of J. A. Baker

10. The Peregrine: The Hill of Summer & Diaries