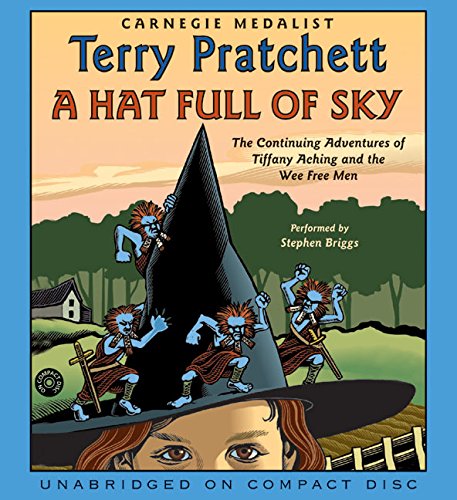 Tiffany Aching -- the boldest heroine ever to swing a frying pan against the forces of evil -- is beginning her apprenticeship in magic. She expects to work hard, learn spells, and become a witch. She doesn't expect to find herself doing chores, caring for the careless, and trying to outthink an ill-tempered nanny goat. There must be more to witchcraft than this!

But as Tiffany pursues her calling, an insidious, disembodied creature pursues Tiffany. When it strikes, neither Mistress Weatherwax (the greatest witch in the world) nor the six-inch-high Wee Free Men (the greatest thieves in the world) can save her ...

Sir Terry Pratchett was the internationally bestselling author of more than thirty books, including his phenomenally successful Discworld series. His young adult novel, The Amazing Maurice and His Educated Rodents, won the Carnegie Medal, and Where's My Cow?, his Discworld book for "readers of all ages," was a New York Times bestseller. His novels have sold more than seventy five million (give or take a few million) copies worldwide. Named an Officer of the British Empire "for services to literature," Pratchett lived in England. He died in 2015 at the age of sixty-six.

Buchbeschreibung HarperFestival, United States, 2004. CD-Audio. Zustand: New. Unabridged. Language: English. Brand new. The second in a series of Discworld novels starring the young witch Tiffany Aching.Something is coming after Tiffany. . . .Tiffany Aching is ready to begin her apprenticeship in magic. She expects spells and magic--not chores and ill-tempered nanny goats! Surely there must be more to witchcraft than this!What Tiffany doesn't know is that an insidious, disembodied creature is pursuing her. This time, neither Mistress Weatherwax (the greatest witch in the world) nor the fierce, six-inch-high Wee Free Men can protect her. In the end, it will take all of Tiffany's inner strength to save herself . . . if it can be done at all. Bestandsnummer des Verkäufers BTE9780060747688

4. A Hat Full of Sky: The Continuing Adventures of Tiffany Aching and the Wee Free Men