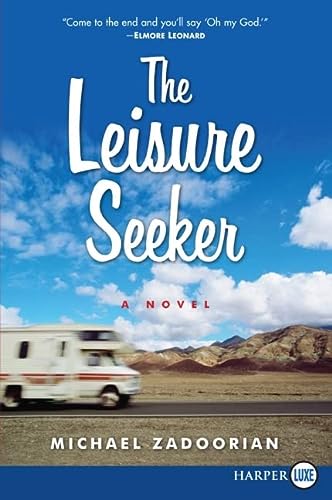 Recognizing that the final stage of their lives is upon them, John and Ella Robina, the former an Alzheimer's patient, the latter succumbing to cancer, sneak away from their over-protective children and doctors to embark on an RV vacation along Route 66. (General Fiction)

John and Ella Robina have shared a wonderful life for more than fifty years. Now in their eighties, Ella suffers from cancer and has chosen to stop treatment. John has Alzheimer's. Yearning for one last adventure, the self-proclaimed "down-on-their-luck geezers" kidnap themselves from the adult children and doctors who seem to run their lives to steal away from their home in suburban Detroit on a forbidden vacation of rediscovery.

With Ella as his vigilant copilot, John steers their '78 Leisure Seeker RV along the forgotten roads of Route 66 toward Disneyland in search of a past they're having a damned hard time remembering. Yet Ella is determined to prove that, when it comes to life, a person can go back for seconds—sneak a little extra time, grab a small portion more—even when everyone says you can't.

Darkly observant, told with humor, affection, and a touch of irony, The Leisure Seeker is an odyssey through the ghost towns, deserted trailer parks, forgotten tourist attractions, giant roadside icons, and crumbling back roads of America. Ultimately it is the story of Ella and John: the people they encounter, the problems they overcome, the experiences they have lived, the love they share, and their courage to take back the end of their own lives.

1. The Leisure Seeker LP: A Novel

2. The Leisure Seeker: A Novel

3. The Leisure Seeker: A Novel