Restless Souls: The Sharon Tate Family's Account of Stardom, Murder and a Crusade 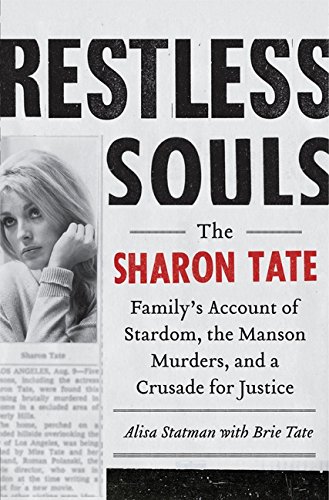 Sharon Tate was a promising young actress who received a Golden Globe nomination for her performance in "Valley of the Dolls"; the beautiful wife of famous film director Roman Polanski; an expectant mother eight and a half months pregnant at the time of her murder; and, a loving daughter and sister. Her brutal slaying and the homicides of her friends that same night by members of the Manson Family are still etched in the public consciousness more than four decades later. What few people know however is: the dramatic role Sharon's father, a retired army intelligence officer, played in finding and prosecuting his daughter's killers; the rage he had to suppress when he came face to face alone with her killer in a holding room during a parole hearing; the threats and menace that extended beyond prison walls, haunting members of even the next generation of the victims' families; the very different choices these three family members made to cope with the realities of this tragedy; the fight Sharon's mother's had to endure to insure that victims' loved ones could make an 'impact statement' at parole hearings; the brushes with danger she repeatedly faced staring down these murderers as she fought to keep them incarcerated; and, the lengths Sharon's sister Patti went through with the entertainment industry to keep artists from glorifying these killers in their music, art and films. Sharon's mother Doris, father Paul and sister Patti, each in their turn, attempted to write memoirs about their ordeal before passing, as they thought it was important to share their side of the story with the world. Now twenty-year family friend, Alisa Statman, and Sharon's niece Brie Tate, recount the Tate family truths for us here in this rare glimpse at the post-trauma survival of a family. This book proves timely as Manson Family leader, Charles Manson, is scheduled for his next parole hearing in 2012. He is also currently seeking a new trial with the help of Saddam Hussein's former attorney The Devil's Advocate Giovanni Di Stefano. Additionally, "Restless Souls" publishes on Sharon's birthday and the same date the jury reached a guilty verdict in 1971.

The gruesome murders of the beautiful and talented actress Sharon Tate, her unborn child and four others that same night at the hands of the notorious “Manson family” rocked the nation. As one of the most horrific crimes in modern history, these atrocities, the trial and the subsequent conviction of Charles Manson and his followers caused a media sensation, spawning movies, documentaries and bestselling books, including the classic Helter Skelter. A defining moment in an era otherwise associated with radical peace, love and understanding, this incident is one that still resonates with millions today.

Yet while this crime left an indelible mark on society’s consciousness, it was, first and foremost, a shattering personal tragedy for those closest to Sharon—the loving family left to cope with the emotional devastation of her loss. Now, after nearly forty years, their story is finally revealed.

Compiled by close family friend Alisa Statman and Sharon’s niece Brie Tate, Restless Souls draws on a wealth of material including interviews with the Tates, personal letters, tape recordings, home movies, public interviews, private journals, and official documents to provide a powerful, poignant, and affecting four-decade, three-generation memoir of crime and punishment, anguish and hope, rage and love, that is both a chronicle of death and a celebration of life.

Extending beyond all previous accounts, Restless Souls is the most revealing, riveting, and emotionally raw account not just of these heinous murders, the hunt and capture of the killers and the behind-the-scenes drama of their trials, but of the torment victims families’ endure for years in the wake of such senseless violence.

Tate family members set the record straight, correcting media misinformation and delving well beyond the official storyline to provide information, much of it available for the first time. Intimate, honest, and heartfelt, Restless Souls remarkable details, including :

Told from the Tate’s extraordinary perspective Restless Souls offers a rare glimpse at the post-trauma survival of a family and their journey to find justice and ultimately, peace—a glimpse that couldn’t be more timely as Charles Manson comes up for parole again in 2012.

1. Restless Souls: The Sharon Tate Family's Account of Stardom, the Manson Murders, and a Crusade for Justice

2. Restless Souls: The Sharon Tate Family's Account of Stardom, the Manson Murders, and a Crusade for Justice

3. Restless Souls: The Sharon Tate Family&#39;s Account of Stardom, the Manson Murders, and a Crusade for J

4. Restless Souls: The Sharon Tate Family's Account of Stardom, the Manson Murders, and a Crusade for Justice

5. Restless Souls: The Sharon Tate Family's Account of Stardom, the Manson Murders, and a Crusade for J