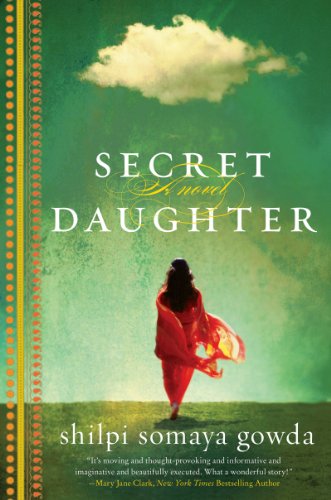 "Gowda has masterfully portrayed two families... linked by a powerful, painful tie that complicates their lives... A thought-provoking examination of the challenges of being a woman in America and in India -- and in the psychological spaces in between." -- Chitra Divakaruni, author of The Palace of Illusions "Set in California and the teeming city of Mumbai, SECRET DAUGHTER is a beautifully composed compelling story of love, loss, discovery and the true meaning of family." -- Anjali Banerjee, author of Imaginary Men Fiction with a conscience, as two couples worlds apart are linked by an adopted child...A lightweight fable of family division and reconciliation, gaining intensity and depth from the author's sharp social observations -- Kirkus First novelist Gowda offers especially vivid descriptions of the contrasts and contradictions of modern India... Rife with themes that lend themselves to discussion, such as cultural identity, adoption, and women's roles, this will appeal to the book club crowd. -- Library Journal It's moving and thought-provoking and informative and imaginative and beautifully executed. What a wonderful story! -- Mary Jane Clark, author of Dying for Mercy The Secret Daughter is a deeply moving and timeless story of an adopted daughter's long distance search for cultural identity and acceptance; first with the mother who raised her, and ultimately with the mother who gave her up. -- Kathleen Kent, author of The Heretic's Daughter In her engaging debut, Gowda weaves together two compelling stories... Gowda writes with compassion and uncanny perception from the points of view of Kavita, Somer, and Asha, while portraying the vibrant traditions, sights, and sounds of modern India. -- Booklist This wise debut moves deftly between the child's two mothers and cultures. -- Good Housekeeping A No. 1 bestseller in Canada, "Secret Daughter" tells a nuanced coming-of-age story that is faithful to the economic and emotional realities of two very different cultures. -- Washington Post

In a tiny hut in rural India, Kavita gives birth to Asha. Unable to afford the luxury of raising a daughter, her husband forces Kavita to give the baby up - a decision that will haunt them both for the rest of their lives. Halfway around the globe, Somer, an American doctor, decides to adopt a child after making the wrenching discovery that she will never have one of her own. When her husband Krishnan shows her a photo of baby Asha sent to him from a Mumbai orphanage, she falls instantly in love. Waiting for the adoption to be finalized, she knows her life will change, but is convinced that the love she already feels will overcome all obstacles. In a braided narrative that unites the stories of Kavita, Somer and Asha, "Secret Daughter" moves between the two families, one struggling to eke out an existence in Mumbai, the other grappling with the challenge of raising a brownskinned child from another culture, Gowda poignantly parses issues of culture, identity, and familial loyalty.