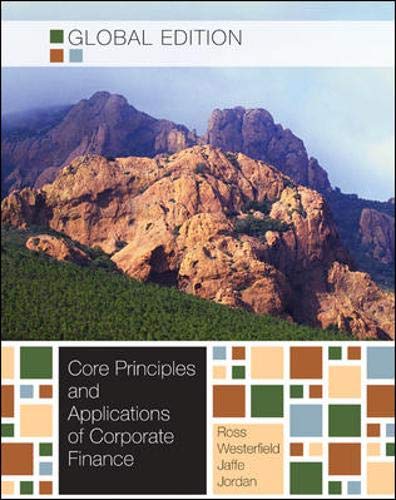 Core Principles and Applications of Corporate Finance, 3rd edition, by Ross, Westerfield, Jaffe and Jordan was written to convey the most important corporate finance concepts and applications at a level that is approachable to the widest possible audience. The concise format, managerial context and design, and student-friendly writing style are key attributes to this text.

RWJJ Core Principles strikes a balance by introducing and covering the essentials, while leaving more specialized topics to follow-up courses. This text distills the subject of corporate finance down to its core, while also maintaining a decidedly modern approach. The well-respected author team is known for the clear, accessible presentation of material that makes this text an excellent teaching tool.

STEPHEN A. ROSS Sloan School of Management, Massachusetts Institute of Technology Stephen A. Ross was the Franco Modigliani Professor of Finance and Economics at the Sloan School of Management, Massachusetts Institute of Technology. One of the most widely published authors in finance and economics, Professor Ross was widely recognized for his work in developing the Arbitrage Pricing Theory and his substantial contributions to the discipline through his research in signaling, agency theory, option pricing, and the theory of the term structure of interest rates, among other topics. A past president of the American Finance Association, he also served as an associate editor of several academic and practitioner journals. He was a trustee of CalTech. He died suddenly in March of 2017.

Randolph W.Westerfield is Dean Emeritus of the University of Southern California's Marshall School of Business and is the Charles B. Thornton Professor of Finance. He came to USC from the Wharton School, University of Pennsylvania, where he was the chairman of the finance department and a member of the finance faculty for 20 years.

Jeffrey F. Jaffe has been a frequent contributor to finance and economic literature in such journals as the Quarterly Economic Journal, The Journal of Finance, The Journal of Financial and Quantitative Analysis, The Journal of Financial Economics, and The Financial Analysts Journal . His best-known work concerns insider trading, where he showed both that corporate insiders earn abnormal profits from their trades and that regulation has little effect on these profits. He has also made contributions concerning initial public offerings, the regulation of utilities, the behavior of market makers, the fluctuation of gold prices, the theoretical effect of inflation on the interest rate, the empirical effect of inflation on capital asset prices, the relationship between small-capitalization stocks and the January effect, and the capital structure decision.