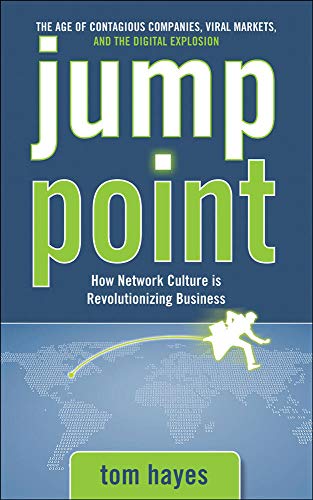 The Web 3.0 world of “pandemic economics” is a new economy that will function outside the traditional laws of commerce, free from today's impediments to business growth, and in a world where every person is connected to each other. Jump Point is the powerful guide that will help you to challenge old assumptions, rethink your business models, and take advantage of this fast-moving, unfettered, and fiercely competitive environment.

Silicon Valley guru Tom Hayes explores how the new economy will arrive at a single jump point by 2011, bringing with it virulent market trends. Only those prepared for the new marketplace dynamics will be left standing amidst unfamiliar players, shape-shifting consumers, and wealth-evaporating forces. This forward-thinking book examines

Don't get left holding yesterday's toolkit. Rethink your business in terms of the global network, and take it from the jump point into exponential growth.

“This is the Tipping Point for geeks.”-Guy Kawasaki

“Ignore this book at your peril. Tom Hayes has seen the future of business-and it is both scary and exhilarating.”-Michael S. Malone, ABCNews.com

“Tom Hayes navigates the future with alacrity. you will learn about bemes, rumor laws, shopping gossip, astroturfing, cruft, and attention theft-all fundamental sociological aspects of the evolving internet and all its offshoots. I read Jump Point and had five new ideas for companies that entrepreneurs can pursue.”-Tim Draper, Draper Fisher Jurvetson

“Jump Point rewarded my attention! Tom Hayes writes with great clarity and insight about new consumers and how new media and technology are changing our daily life habits...one of the best business books I have read this year.”-Ted Leonsis, Vice Chairman Emeritus, AOL

4. Jump Point: The Age of Contagioius Companies, Viral Markets, and the Digital Explosion