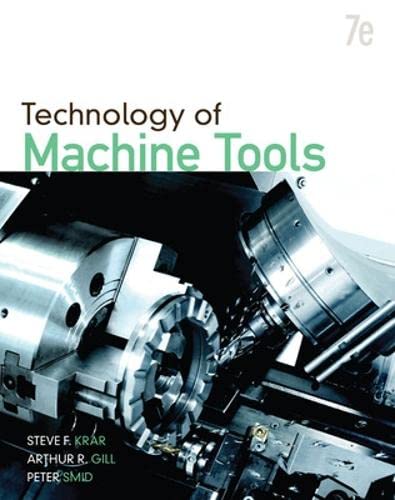 Technology of Machine Tools 7e provides state-of-the-art training for using machine tools in manufacturing technology, including up-to-date coverage of computer numerical control (CNC). It includes an overview of machine trades and career opportunities followed by theory and application. The text is structured to provide coverage of tools and measurement, machining tools and procedures, drilling and milling machines, computer-aided machining, and metallurgy. There is expanded coverage of computer-related technologies, including computer numerical control (CNC) and computer-aided design and manufacturing (CAD/CAM).

New to the Seventh Edition of Technology of Machine Tools

In addition to updating the text to reflect changes in the modern business/manufacturing world today – such as direct digital manufacturing,nantotechnology, and IDI – an entirely new section on Lean Manufacturing (Section 15)has been added to focus on this industry-prominent philosophy.

Steve F. Krar spent 15 years in the trade, first as a machinist and finally as a tool and die maker. After this period, he entered Teachers College and graduated from the University of Toronto with a Specialists Certificate in Machine Shop Practice. During these 20 years of teaching, Mr. Krar was active in vocational and technical education and served on the executive committee of many educational organizations. For 10 years, he was on the summer staff of the College of Education, University of Toronto, involved in teacher training programs. Active in machine tool associations, Steve Krar is a Life Member of the Society of Manufacturing Engineers and former associate director of the GE Superabrasives Partnership for Manufacturing Productivity. He was inducted into the Canadian Manufacturers Hall of Fame in March 2009. Mr. Krars continual research over the past 50 years in manufacturing technology has involved many courses with lead- ing world manufacturers and an opportunity to study under Dr. W. Edwards Deming. Mr. Krar spent a week researching Nano- technology at leading research centers, universities, and industry in Switzerland. He is coauthor and consultant of over 80 technical books, such as Machine Shop Training, Machine Tool Operations, CNC Simplified, SuperabrasivesGrinding and Machining, Exploring Advanced Manufacturing Technologies, some of which have been translated into 5 languages and used throughout the world. Jonathan A. Gill graduated from high school with an Ontario Secondary School Diploma. He entered Ryerson University in the industrial engineering program and then went into geographical analysis. Mr. Gill attended Humber College for electronics engineering and then spent 2 years at Mohawk College for computer networking and security analysis. Mr. Gill is currently an independent contractor employed by Nexas Networks Inc. as an Applications Engineer and Support Manager, providing factory floor networking and information technology for the aerospace and automotive industry, jobbing shops, and production discrete manufacturing facilities. Mr. Gill assisted the authors with the research, artwork, and final production of manuscript for the textbook Computer Numerical Control Simplified and is coauthor of the book Changing World of Manufacturing. Peter Smid graduated from high school with a specialty in machine shop training. He then entered industry, completed an apprenticeship program, and gained valuable experience as a machinist skilled on all types of machine tools. Mr. Smid immigrated to Canada in 1968 and spent the next 26 years employed in the machine tool industry as a machinist and tool and die maker. In the early 1970s, he became involved in Computer Numerical Control (CNC) as a programmer/operator and devoted the next 18 years to becoming proficient in all aspects of computerized manufacturing. In 1989, he became an independent consultant, and hundreds of companies have used Mr. Smids CNC and CAD/CAM skills to improve their manufacturing operations. He also wrote a comprehensive, 500-page CNC programming handbook, which is rapidly becoming the Bible of the trade. In 1995, he became a consultant/professor of Advanced Manufacturing focusing on industrial and customized training in CNC, CAD/CAM, and Agile Manufacturing. His many years of teaching, training, lecturing, and designing curriculum give him the opportunity to pass along his vast knowledge of modern manufacturing technology to students of all ages.

Buchbeschreibung McGraw-Hill Education. soft cover. Zustand: New. International Edition. No supplemental materials. International Editions may have a different cover or ISBN but generally have the exact same content as the US edition, just at a more affordable price. In some cases, end of chapter questions may vary slightly from the US edition. International Editions are typically printed in grayscale, and likely will not have any color throughout the book. New. Books ship from multiple locations depending on availability. All orders are shipped with tracking information. We take pride in our customer service. Please contact us if you have any questions regarding this listing. Bestandsnummer des Verkäufers 9514

Buchbeschreibung McGraw-Hill Education, 2010. Softcover. Zustand: New. ***International Edition***Soft cover/Paperback*** Textbook printed in English. ***Brand New***. Most international edition has different ISBN and Cover design. Some book may show sales disclaimer such as "Not for Sale or Restricted in US" on the cover page but it is absolutely legal to use. All textbook arrives within 5-7business days. Please provides valid phone number with your order for easy delivery. Bestandsnummer des Verkäufers 9780073510835