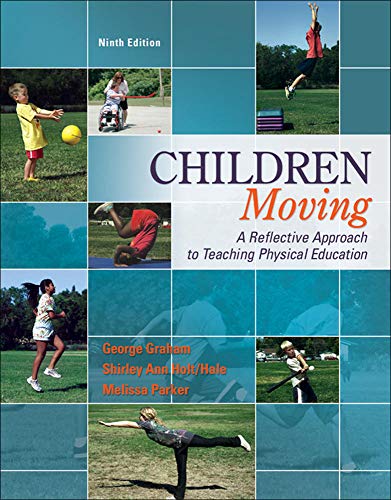 Children! Impressionable, innocent, enthusiastic, eager to learn, and all different. In fact, if you believe that all children are identical―with the same interests, abilities, and size―then Children Moving is not the book for you. The authors of Children Moving, however, recognize that each child is unique. One size does not fit all! Thus, Children Moving guides you in the process of learning to teach a curriculum that is differentiated for a range of skill abilities and fitness levels. If all children were the same, we would be able to package a curriculum with the same games and the same gymnastic stunts and dances you would do with all of the children as if they were identical. Children Moving, on the other hand, introduces you to the reflective approach―a process of teaching that provides the background for you to adapt, adjust, and modify lessons so they are interesting and worthwhile for all of the children you teach―from the lowest to the highest skill and fitness levels. The ultimate goal, of course, is to guide youngsters in the process of becoming physically active for a lifetime.

The lesson plans to accompany Children Moving, On the Move: Lesson Plans for Children Moving, are now available on the CREATE platform as an ExpressBook. To order your print or eBook copies, visit http://create.mcgraw-hill.com.

George Graham, PhD, joined the faculty in the Department of Kinesiology at Penn State in August 2002. He serves as the coordinator of the K-12 Health and Physical Education program and as the Director of the Pedagogy of Physical Activity Laboratory. He moved to Penn State after 17 years on the faculty at Virginia Tech. He began his career teaching and coaching in the public schools of California and Oregon and also served on the faculties of the University of Georgia and the University of South Carolina. Dr. Graham has published extensively on the topics of physical education teacher effectiveness and physical education and activity for children with twelve books and monographs to his credit and over 50 articles. He is a much sought after speaker and consultant, delivering presentations at more then 100 conferences (over 35 were keynote addresses) throughout the world as well as serving as a consultant to seventy-five school districts, the United States Tennis Association (USTA) and the Professional Golf Association of America. Dr. Graham has appeared on CBS in the Morning, CNN, and National Public Radio (NPR) to speak on the topic of positive physical education for children. He has also been cited in USA Today, The Harvard Review and The Washington Post. A recipient of numerous awards, he most recently was inducted as a Fellow in the North American Society for Health, Physical Education, Recreation and Dance. He was awarded the Margie Hanson Honor Award presented by the Council on Physical Education for Children, and the National Association for Sport and Physical Education Curriculum and Instruction Academy Honor Award. Dr. Graham served as the Executive Director of the United States Physical Education Association. Along with his graduate students he wrote the first developmentally appropriate document for the National Association for Sport and Physical Education (NASPE). He is the immediate past-President of NASPE. He also serves on the PepsiCo Blue Ribbon Advisory Board for Health and Wellness and as the Director of Research and Curriculum Development for Top Dog Fitness. His most recent work is focused on educational uses of computer technology for teachers and students. He is the senior advisor for PE Central, the ultimate website for physical education teachers that averages over 70,000 unique visitors per month. Dr. Graham also is the senior advisor to Healthy Hearts, an e-Learning module delivered via the Internet for upper elementary and middle school students, designed to teach them about cardiovascular disease, physical activity, nutrition and tobacco avoidance. Healthy Hearts is currently being used extensively in West Virginia and New York.

Shirley Ann Holt/Hale is an elementary physical education teacher at Linden Elementary School in Oak Ridge, Tennessee, a position she has held for more than 30 years. She is the immediate past-president of the American Alliance for Health, Physical Education, Recreation and Dance, the first elementary physical education teacher ever elected to the highest office of the Alliance. She is a Past-President of NASPE, a member of the NASPE Hall of Fame, and a charter member of the North American Society for Health and Physical Education Professionals. She has previously been recognized as the National Elementary Physical Education Teacher of the Year. She served on the Task Force for the development of the National Standards for Physical Education (NASPE), and served as chairperson for the development of the National Teaching Standards for Physical Education (NBPTS). Dr. Holt/Hale has authored eight books, has written numerous articles, and has made over 150 invited presentations throughout the U.S. In addition to her daily teaching of elementary physical education, she serves as a consultant in curriculum development, assessment, and teaching by themes. Holt/Hale has an undergraduate degree from Berea College and a Ph.D. from Peabody/Vanderbilt University.

Melissa Parker is a professor in the School of Sport and Exercise Science at the University of Northern Colorado. Her areas of interest are elementary physical education and teacher education. Prior to entering higher education, Parker was an elementary physical education teacher in middle school physical education in a special program for underserved youth. Regardless of the level of teaching involved, she has the consistent desire to see students become self-directed, responsible learners. Parker received her PhD and MA from The Ohio State University. Her undergraduate degree was from the University of North Carolina at Greensboro, from which she recently received the School of Health and Human Performance Distinguished Alumni Award. Dr. Parker has been active in a variety of capacities at the state, regional, and national levels of AAHPERD. She has received Honor Awards at the state and national levels for her service and dedication to students.

Buchbeschreibung 2012. Hardcover. Zustand: New. 9th. Hardcover. Children! Impressionable, innocent, enthusiastic, eager to learn, and all different. In fact, if you believe that all children are identical-with the same interests, abilities, and size-th.Shipping may be from multiple locations in the US or from the UK, depending on stock availability. 700 pages. 1.870. Bestandsnummer des Verkäufers 9780077626532

Buchbeschreibung 2012. Hardcover. Zustand: New. 9th. Hardcover. Children! Impressionable, innocent, enthusiastic, eager to learn, and all different. In fact, if you believe that all children are identical-with the same interests, abilities.Shipping may be from our Sydney, NSW warehouse or from our UK or US warehouse, depending on stock availability. 700 pages. 1.870. Bestandsnummer des Verkäufers 9780077626532