Munich: Soon to be a major movie starring Jeremy Irons 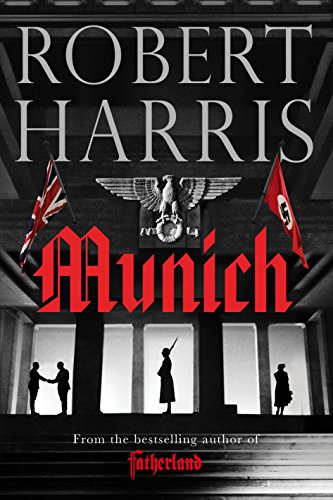 FROM THE BESTSELLING AUTHOR OF FATHERLAND, CONCLAVE AND AN OFFICER AND A SPY. September 1938Hitler is determined to start a war. Chamberlain is desperate to preserve the peace., The issue is to be decided in a city that will forever afterwards be notorious for what takes place there. Munich. As Chamberlain's plane judders over the Channel and the Fuhrer's train steams relentlessly south from Berlin, two young men travel with secrets of their own., Hugh Legat is one of Chamberlain's private secretaries; Paul Hartmann a German diplomat and member of the anti-Hitler resistance. Great friends at Oxford before Hitler came to power, they haven't seen one another since they were last in Munich six years earlier. Now, as the future of Europe hangs in the balance, their paths are destined to cross again., When the stakes are this high, who are you willing to betray? Your friends, your family, your country or your conscience?

"Grips from start to finish . . . Munich captures the mood of the times: the suspicion and the fear, the political intrigue, the swagger of the Nazi machine and the widespread elation at the mistaken belief that war has been averted. Superb." (Simon Humphreys Mail on Sunday)

"Harris’s cleverness, judgment and eye for detail are second to none . . . his research is so impeccable that he could have cut all the spy stuff and published Munich as a history book. Harris’s treatment of Britain’s most maligned prime minister is so powerful, so persuasive, that it ranks among the most moving fictional portraits of a politician that I have ever read" (Dominic Sandbrook Sunday Times)

"An intelligent thriller . . . with exacting attention to historical detail" (The Times, BOOKS OF THE YEAR)

"Atmospheric and fast-paced literary thriller . . . [it] grips from start to finish . . . Superb" (Mail on Sunday)

"Unputdownable to the point of being dangerous: the house could have been on fire while I was reading and I wouldn’t have noticed" (Jake Kerridge Sunday Express)

"Harris makes the reader gasp at every turn, with a truly moving portrayal of Chamberlain as a man who did the wrong thing for the right reason" (Daily Express, BOOKS OF THE YEAR)

"A tantalising addition to the inexhaustible game of “what if”?" (Anthony Quinn Guardian)

"A wonderful tale of personal relationships and political drama...This is a very, very good read" (Vince Cable Spectator, BOOKS OF THE YEAR)

Robert Harris is the author of twelve bestselling novels: the Cicero Trilogy - Imperium, Lustrum and Dictator - Fatherland, Enigma, Archangel, Pompeii, The Ghost, The Fear Index, An Officer and a Spy, which won four prizes including the Walter Scott Prize for Historical Fiction, Conclave and most recently, Munich. Several of his books have been filmed, including The Ghost, which was directed by Roman Polanski. His work has been translated into thirty-seven languages and he is a Fellow of the Royal Society of Literature. He lives in West Berkshire with his wife, Gill Hornby.