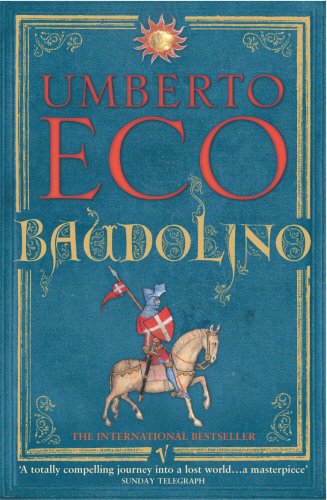 Eco returns to the Middle Ages with Baudolino - a wondrous, provocative, beguiling tale of history, myth, and invention. It is April, 1204, and Constantinople, the splendid capital of the Byzantine Empire, is being sacked and burned by the knights of the fourth Crusade. Amid the carnage and confusion, one Baudolino saves a Byzantine historian and high court official from certain death at the hands of the crusading warriors, and proceeds to tell his own fantastical story. Born a simple peasant in northern Italy, Baudolino has two major gifts - a talent for learning foreign languages and skill in telling lies. One day, when still a boy, he met a foreign commander in the woods, charming him with his quick wit and lively mind. The commander - who proves to be the emperor Frederick Barbarossa - adopts Baudolino and sends him to the university in Paris, where he makes a number of fearless, adventurous friends. Spurred on by myths and their own reveries, this merry band sets out in search of Prester John, a legendary priest-king who was said to rule over a vast kingdom in the East - a phantasmagorical land of strange creatures with eyes on their shoulders and mouths on their stomachs, of eunuchs, unicorns, and lovely maidens. As always with Eco, this abundant novel includes dazzling digressions, outrageous tricks, pages of extraordinary feeling and poetry, and vicarious reflections on our postmodern age. Baudolino is an utterly marvellous tale by the inimitable author of The Name of the Rose.

Umberto Eco (1932-2016) wrote fiction, literary criticism and philosophy. His first novel, The Name of the Rose, was a major international bestseller. His other works include Foucault's Pendulum, The Island of the Day Before, Baudolino, The Mysterious Flame of Queen Loana, The Prague Cemetery and Numero Zero along with many brilliant collections of essays.