The Rule Of Four 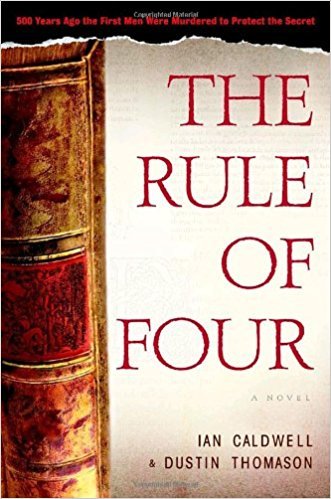 "One part The Da Vinci Code, one part The Name of the Rose - A blazingly good yarn [and] an exceptional piece of scholarship ... A smart, swift, multitextured tale that both entertains and informs" (San Francisco Chronicle)

"The Da Vinci Code for people with brains" (Independent)

"A stunning first novel ... if Scott Fitzgerald, Umberto Eco, and Dan Brown teamed up to write a novel, the result would be The Rule of Four. An extraordinary and brilliant accomplishment - a must read" (Nelson DeMille)

Tom Sullivan is about to graduate from Princeton. He's intelligent and popular, but haunted by the violent death several years earlier of his father, an academic who devoted his life to studying one of the rarest, most complex and most valuable books in the world. Since its publication in 1499, the Hypnerotomachia Poliphili has baffled scholars who have tried to understand its many mysteries. Coded in seven languages, the text is at once a passionate love story, an intricate mathematical labyrinth, and a tale of arcane brutality. Paul Harris, Tom's roommate, has deeply personal reasons of his own for wanting to unveil the secrets the book hides. When a long-lost diary surfaces, it seems the two friends have found the key to the labyrinth -- but when a fellow researcher is murdered only hours later, they suddenly find themselves in great danger. And what they discover embedded in the text stuns them: a narrative detailing the passion of a Renaissance prince, a hidden crypt, and a secret worth dying to protect ...