Chemoarchitectonic Atlas of the Mouse Brain 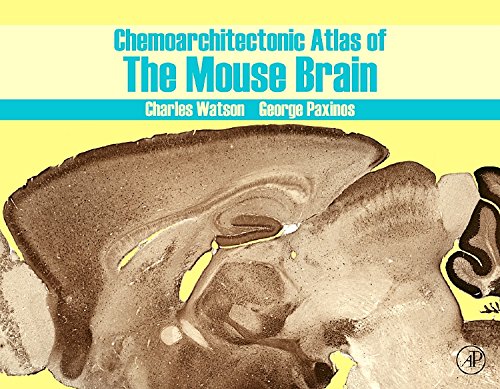 For over two decades, Paxinos and Watson's The Rat Brain in Stereotaxic Coordinates, now in its 6th edition, and Franklin and Paxinos' The Mouse Brain in Stereotaxic Coordinates, now in its 3rd edition, have been the most used neuroanatomy references for neuroscientists. Both the illustrations and nomenclature of the atlas have become standard tools used by almost all research neuroscientists who deal with anatomy, physiology, or function.
This new atlas represents the first time an accurate histochemical atlas showing the areas of the mouse brain in microscopic slides in a variety of different stains has been available. Until now researchers studying the mouse brain have been forced to consult the existing histochemical atlases of the rat brain (including Paxinos and Watson's) and extrapolate from rat data - a strategy which is not very accurate and often not successful. This atlas collects systematic images of the mouse brain stained with a range of key chemical markers to complement The Mouse Brain in Stereotaxic Coordinates.

* 350 sections of the mouse brain, stained serially with Nissl and six chemical markers (parvalbumin, calbindin, calretinin, tyrosine hydroxylase, NADPH diaphorase, and GAD)
* Features diagrams in addition to the sections
* Sections are labelled on the photographs
* Newly developed format showing 7 photographs and one diagram on each open book page in a 14"x11" format facilitates use in the laboratory
* Fills a huge gap in detailed information on the mouse brain
* Features neuromeric borders based on the system developed in Puelles et al. Atlas of the Chick Brain in Stereotaxic Coordinates (2007)
* The perfect partner to the stereotaxic atlases and references published by Elsevier

Professor George Paxinos, AO (BA, MA, PhD, DSc) completed his BA at The University of California at Berkeley, his PhD at McGill University, and spent a postdoctoral year at Yale University. He is the author of almost 50 books on the structure of the brain of humans and experimental animals, including The Rat Brain in Stereotaxic Coordinates, now in its 7th Edition, which is ranked by Thomson ISI as one of the 50 most cited items in the Web of Science. Dr. Paxinos paved the way for future neuroscience research by being the first to produce a three-dimensional (stereotaxic) framework for placement of electrodes and injections in the brain of experimental animals, which is now used as an international standard. He was a member of the first International Consortium for Brain Mapping, a UCLA based consortium that received the top ranking and was funded by the NIMH led Human Brain Project. Dr. Paxinos has been honored with more than nine distinguished awards throughout his years of research, including: The Warner Brown Memorial Prize (University of California at Berkeley, 1968), The Walter Burfitt Prize (1992), The Award for Excellence in Publishing in Medical Science (Assoc Amer Publishers, 1999), The Ramaciotti Medal for Excellence in Biomedical Research (2001), The Alexander von Humbolt Foundation Prize (Germany 2004), and more.

1. Chemoarchitectonic Atlas of the Mouse Brain

2. Chemoarchitectonic Atlas of the Mouse Brain

3. Chemoarchitectonic Atlas of the Mouse Brain