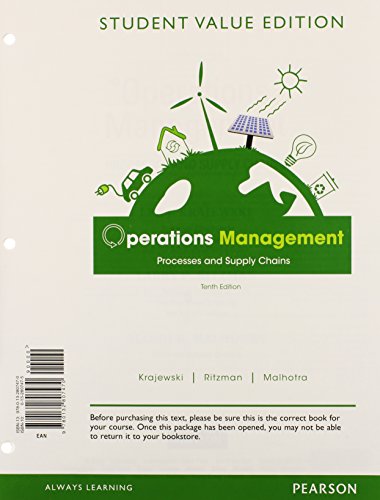 LEE J. KRAJEWSKI is the William R. and F. Cassie Daley Professor of Manufacturing Strategy at the University of Notre Dame. Prior to joining Notre Dame, Lee was a faculty member at The Ohio State University, where he received the University Alumni Distinguished Teaching Award and the College of Business Outstanding Faculty Research Award. He initiated the Center for Excellence in Manufacturing Management and served as its director for four years. In addition, he received the National President's Award and the National Award of Merit of the American Production and Inventory Control Society. He served as President of the Decision Sciences Institute and was elected a Fellow of the Institute in 1988. He received the Distinguished Service Award in 2003. Lee received his Ph.D. from the University of Wisconsin. Over the years, he has designed and taught courses at both graduate and undergraduate levels on topics such as operations strategy, introduction to operations management, project management, operations design, and manufacturing planning and control systems. Lee served as the editor of "Decision Sciences," was the founding editor of the "Journal of Operations Management," and has served on several editorial boards. Widely published himself, Lee has contributed numerous articles to such journals as "Decision Sciences," the "Journal of Operations Management," "Management Science," "Harvard Business Review," and "Interfaces," to name just a few. He has received five best-paper awards. Lee's areas of specialization include operations strategy, manufacturing planning and control systems, supply-chain management, and master production scheduling. LARRY P. RITZMAN is the Thomas J. Galligan, Jr.Professor Emeritus in Operations and Strategic Management at Boston College, where he received the Distinguished Service Award from the School of Management. He is also Professor Emeritus at The Ohio State University where he served for twenty-three years. He received several awards at Ohio State for both teaching and research, including the Pace Setters' Club Award for Outstanding Research. He received his doctorate at Michigan State University, having had prior industrial experience at the Babcock and Wilcox Company. Over the years, he has been privileged to teach and learn more about operations management with numerous students at all levels-undergraduate, MBA, executive MBA, and doctorate. Particularly active in the Decision Sciences Institute, Larry has served as Council Coordinator, Publications Committee Chair, Track Chair, Vice President, Board Member, Executive Committee Member, Doctoral Consortium Coordinator, and President. He was elected a Fellow of the Institute in 1987 and earned the Distinguished Service Award in 1996. He has received three best-paper awards. He is a frequent reviewer, discussant, and session chair for several other professional organizations. Larry's areas of particular expertise are service processes, operations strategy, production and inventory systems, forecasting, multistage manufacturing, and layout. An active researcher, Larry's publications have appeared in such journals as "Decision Sciences," "Journal of Operations Management," "Production and Operations Management," "Harvard Business Review," and "Management Science," He has served in various editorial capacities for several journals. MANOJ K. MALHOTRA is the Jeff B. Bates Professor andChairman of the Management Science Department at the Moore School of Business, University of South Carolina (USC), Columbia. He holds an engineering undergraduate degree from The Indian Institute of Technology (IIT) Kanpur, India, and a Ph.D. in operations management from The Ohio State University. He is certified as the Fellow of American Production and Inventory Management Society (CFPIM), and has conducted seminars and consulted with firms such as John Deere, Metso Corporation, Phelps Dodge, Sonoco, UCB Chemicals, Milliken, and Verizon among others. Apart from teaching operations management, supply chain management, and global business issues at USC, Manoj has also taught at the Terry School of Business, University of Georgia; Wirtschaftsuniversitat Wien in Austria; and the Graduate School of Management at Macquarie University, Australia. His research has thematically focused on the deployment of flexible resources in manufacturing and service firms, and on the interface between operations and supply chain management and other functional areas of business. His work on these and related issues has been published in refereed journals such as "Decision Sciences," "European Journal of Operational Research," "IIE Transactions, International Journal of Production Research," "Journal of Operations Management," "OMEGA, "and "Production and Operations Management Journal." He is a recipient of the Decision Sciences Institute's Outstanding Achievement Award for the Best Application Paper in 1990, and the Stan Hardy Award in 2002 for the best paper published in the field of Operations Management. Manoj has won several teaching awards, including the Alfred G. Smith Jr. Excellence in TeachingAward in 1995 from the Moore School of Business at the University of South Carolina. He was voted by the students as an Outstanding Professor in the International MBA program by the classes of 1997, 1998, 1999, 2000, and 2005; and as the Outstanding Professor in the IMBA-Vienna program by the classes of 1998 and 2004. He was designated as one of the first "Master Teachers" in the Moore School of Business in 1998. He has been listed in "Who's Who among America's Teachers" in 1996 and 2000. Manoj is an associate editor of "Decision Sciences" and "Journal of Operations Management," past area editor of "POMS Journal" (2000-2003), and an editorial review board member of" Journal of Managerial Decision-Making," He is an active referee for several other journals in the field, and served as the co-editor for special focus issues of "Decision Sciences" (1999) and "Journal of Operations Management "(2002). He is the Program Chair for the 36th International Meeting of the Decision Sciences Institute (DSI) in San Francisco in 2005, and has also served as an associate program chair for the POMS national meeting in 1994. He has been involved in the Mid-Carolina chapter of APICS as its past President, executive board member, and an instructor of professional level CPIM certification courses.