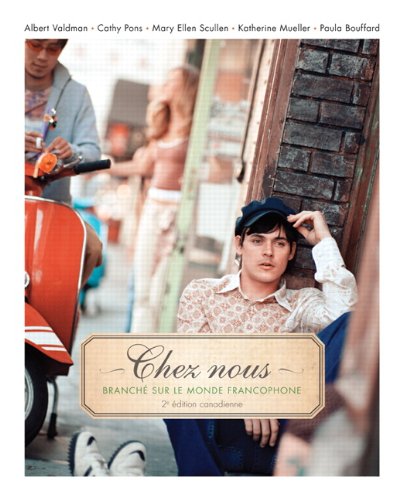 Chez nous offers students a wide-ranging cultural perspective, focusing on French Canada and the Francophone world as a whole. It uses a careful progression from skill-developing to skill-using activities and a full complement of supplementary materials to help students develop listening, reading, speaking, and writing skills.

A native of Paris, Albert Valdman dates his interest in languages back to when, as a young teenager, he served as a shepherd in southwestern France. His contact with the local southern French Languedoc dialect stimulated a burning interest in the study of language as a cultural phenomenon. Valdman immigrated to the United States and eventually earned a PhD in French linguistics from Cornell University. He started his career at the Foreign Service Institute of the U.S. Department of State and at Pennsylvania State University before joining Indiana University, where he attained the distinguished rank of Rudy Professor of French, Italian, and Linguistics. He served as visiting professor at Harvard and the University of the West Indies (Jamaica), and for several years at the University of Nice. He also taught at the University of Oregon summer institutes for high school French teachers at Tours and organized summer institutes for college teachers sponsored by the American Association of Teachers of French (AATF). At Indiana University, he created the program in French linguistics and the Creole Institute and directed the program of elementary and intermediate French, including the mentoring of graduate student instructors and coordinators. A constant in his career has been his interest in developing more effective approaches to the teaching of foreign languages, with a passionate focus on his native language, the training of teachers, and the preparation of pedagogical materials. Valdman held the posts of president of the AATF and, for two terms, of president of the International Association of Applied Linguistics. For his commitment to the teaching of French language and culture and his pioneering work in the description of French outside of France, he was named Commandeur dans l’Ordre des Palmes Académiques of France and named member of l’Ordre des Francophones d’Amérique of the government of Québec.

Cathy Pons grew up hearing French spoken by her grandparents but only began study of the language in high school. After completing a BA in French at the University of North Carolina at Greensboro, she spent a year in France as a Fulbright Teaching Assistant. Pons completed her doctorate in French linguistics at Indiana University where, as an Assistant Professor, she directed the elementary French program and the MA in French instruction. Pons served on the faculty of several AATF summer institutes and on the Executive Board of the Indiana chapter of AATF. Pons has taught at the University of North Carolina at Asheville since 1995, where she is Associate Professor in the Department of Foreign Languages. She is past president of the Foreign Language Association of North Carolina and has received numerous grants in support of study-broad programs for students and faculty. With more than twenty-five years’ experience in elementary French teaching and teacher preparation, Pons finds the classroom to be a stimulating environment.

Mary Ellen Scullen has been enamoured of French from her first exposure in the seventh grade. After completing her BA in French at Kalamazoo College in Michigan, she went to Tours, France to be a French government—sponsored teaching assistant for one year. Three years later, Scullen returned to the U.S. with a Licence de Lettres modernes, mention Français Langue Étrangère and a Maîtrise de Français Langue Étrangère from Université François Rabelais in Tours. After teaching at Kalamazoo College for a year, Scullen went to Indiana University, where she earned a joint PhD in French Linguistics and Theoretical Linguistics in 1993. Scullen has taught French language, culture, and linguistics, coordinated the basic French language program, and supervised teaching assistants at the University of Louisville and, since 1998, at the University of Maryland, Coll