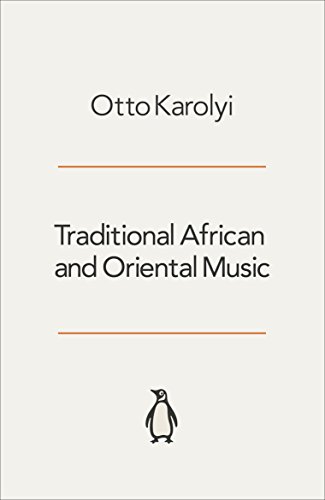 The aim of this book is to offer an introduction to the underlying principles of non-Western music and to encourage the reader to explore rich and fascinating sounds and rhythms from around the world. Otto Karolyi covers the traditional music of five continents, namely Sub-Saharan Africa, the Islamic world, the Indian subcontinent, China and the Far East. Each chapter examines the rhythm, melody, harmony and instruments of the region's music, plus elements of the culture which contribute towards an appreciation of the music, such as religion, poetry, drama and dance.

People are stimulated and entertained by the fascinating sounds and rhythms of non-Western music yet they generally know little about its underlying principles.

This detailed and hugely informative reference book examines the musical traditions of these very diverse cultures and explains how each one is affected by the native philosophies, religions and social structures. In African music, for example, music is dominated by trance-inducing rhythm and largely percussive instruments. In Islamic countries, music is primarily vocal and is often ideologically viewed with suspicion. Indian music, on the other hand, balances melodic and rhythmical expressions both in its secular and sacred contexts and, unlike Western music, its rhythmic thinking is additive rather than divisionist. In contrast, Chinese music is rhythmically 'square', that is predictably in two or four beats. Japanese music reflects the highly sophisticated styles of the courts, whereas the music of Bali and Java shows an ingenious amalgamation of Indian, Chinese and Islamic influences with its native traditions. This comprehensive introduction includes sections on the rhythm, melody, harmony and traditional instruments of the different regions.

'Having travelled throughout the world as a performing musician, it is clear that music is not only a universal language but also a medicine to us all. Through his publication Otto Karolyi has stirred our curiousity to delve further into the music and culture of the different continents. His superb account will be of interest to anyone who shares a fascination with music, our worldly friend' Evelyn Glennie