Verwandte Artikel zu Out of Silence: An Autistic Boy's Journey Into...

Martin, Russell Out of Silence: An Autistic Boy's Journey Into Language And Communicat Ion

Out of Silence: An Autistic Boy's Journey Into Language And Communicat Ion 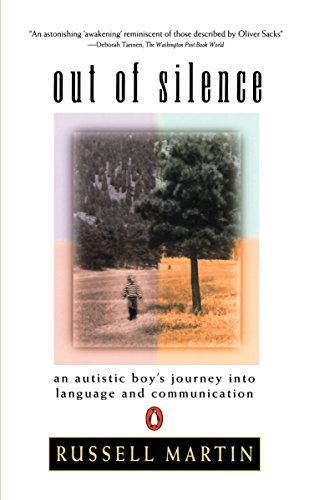 Ian Drummond spoke his first words at the age of eighteen months. In the days and then years that followed, there would be no others. Diagnosed as autistic, he fell into a world of silence, his life shaped by sudden screaming, inexplicable fears, and obsessive rituals. This mesmerizing and inspiring book follows Ian and his family as they valiantly struggle to restore his speech. But as told by Russell Martin, the acclaimed writer who is also Ian’s uncle, Out of Silence is also a learned and often poetic investigation of language itself, a book that draws on disciplines from neurophysiology to linguistics in search of the elusive miracle that some people think is the defining feature of our species.

Russell Martin's Picasso's War: The Destruction of Guernica, and the Masterpiece That Changed the World is published in hardcover by Dutton and in unabridged audio by Highbridge. He is the author of Beethoven's Hair (2000), a U.S. bestseller and winner of the Colorado Book Award, which has been published in fifteen editions around the world and will soon be the subject of an international television documentary. His highly acclaimed 1994 book, Out of Silence, was named by the Bloomsbury Review as one of fifteen best books of its first fifteen years of publication. A Story That Stands Like A Dam: Glen Canyon and the Struggle for the Soul of the West (1989), won the Caroline Bancroft History Prize. He also is the author of the novel Beautiful Islands (1988); The Color Orange: A Super Bowl Season with the Denver Broncos (1987); Matters Gray and White: A Neurologist, His Patients & the Mysteries of the Brain (1986); Entering Space (co-authored with Joseph P. Allen, 1984), and Cowboy: The Enduring Myth of the Wild West (1983). He has edited two anthologies of contemporary western writing, Writers of the Purple Sage (1984) and New Writers of the Purple Sage (1992). He is a graduate of The Colorado College in Colorado Springs, where he has returned to teach for eighteen years. He also has taught courses at conferences including Writers@Work and the Desert Writers workshop. He spent a postgraduate year on a Thomas Watson Foundation fellowship in Great Britain and Guatemala and worked as a newspaper reporter in Telluride, Colorado for a number of years before becoming a freelance writer. In 1995, he was awarded an honorary doctorate by his alma mater. He lives in Denver and Salt Lake City.

1. Out of Silence: An Autistic Boy's Journey into Language and Communication [Paperback] Martin, Russell

2. Out of Silence: An Autistic Boy's Journey into Language and Communication [Paperback] Martin, Russell

3. Out of Silence: An Autistic Boy's Journey into Language and Communication