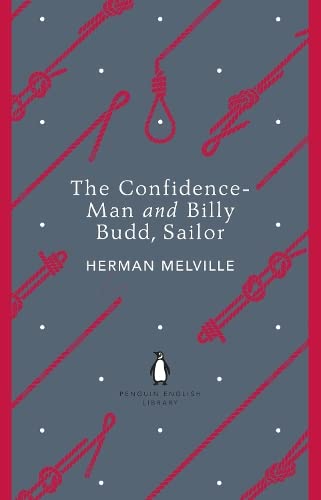 The Penguin English Library Edition of The Confidence - Man and Billy Budd, Sailor by Herman Melville

'Life is a pic-nic en costume; one must take a part, assume a character, stand ready in a sensible way to play the fool'

In The Confidence-Man, Melville's unnerving and hallucinatory satire on the American dream, a slippery trickster and master of disguise comes to swindle his fellow passengers - who themselves may also be con-men - aboard a Mississippi steamboat.

Billy Budd, Sailor, published after Melville's death in 1891, is a gripping allegory of good and evil, as an innocent man, pressed into service on a British man-of-war, is falsely accused of mutiny. Both these late works are animated with the dark genius of the greatest of American writers.

The Penguin English Library - 100 editions of the best fiction in English, from the eighteenth century and the very first novels to the beginning of the First World War.

Herman Melville (1819-91) became in his late twenties a highly successful author of exotic novels based on his experiences as a sailor - writing in quick succession Typee, Omoo, Redburn and White-Jacket. However, his masterpiece Moby-Dick was met with incomprehension and the other later works which are now the basis of his reputation, such as Bartleby, the Scrivener and The Confidence-Man, were failures. Melville stopped writing fiction and the rest of his long life was spent first as a lecturer and then, for nineteen years, as a customs official in New York City. He was also the author of the immensely long poem Clarel, which was similarly dismissed. At the end of his life he wrote Billy Budd, Sailor which was published posthumously in 1924.

Buchbeschreibung Paperback. Zustand: Very Good. The book has been read, but is in excellent condition. Pages are intact and not marred by notes or highlighting. The spine remains undamaged. Bestandsnummer des Verkðufers GOR006460527

Buchbeschreibung Paperback. Zustand: Good. The book has been read but remains in clean condition. All pages are intact and the cover is intact. Some minor wear to the spine. Bestandsnummer des Verkðufers GOR006905013

Buchbeschreibung Paperback. Zustand: Very Good. The book has been read, but is in excellent condition. Pages are intact and not marred by notes or highlighting. The spine remains undamaged. Bestandsnummer des Verkðufers CIN001323140