Verwandte Artikel zu Players First: Coaching from the Inside Out

Calipari, John; Sokolove, Michael Players First: Coaching from the Inside Out

Players First: Coaching from the Inside Out 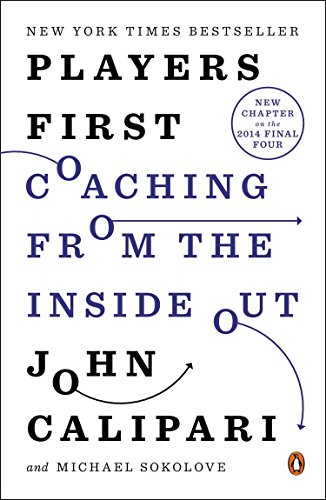 President William J. Clinton:
"If you are a college basketball fan like I am, you'll understand why I've long admired John Calipari's leadership style. While no coach treasures a win more than John, this terrific book reveals his greater purpose--to lead his young players to better lives, and then challenge them to give back to others."

Harvey Mackay, author of the New York Times #1 bestseller Swim With The Sharks Without Being Eaten Alive
"John Calipari tells his players: Embrace the work. Embrace the sweat. Embrace the pain. I say: Embrace this book. It's basketball at its finest." Simon Sinek, optimist and author of Start with Why and Leaders Eat Last
"Players First is filled with so many nuggets of wisdom, I found myself highlighting and taking notes as I read. Writing like a loving but honest parent, Calipari shares stories of how he learned to inspire greatness from his players and how they pushed themselves to achieve more than they thought possible. A truly human account of what it takes to win, Players First proves that winning has nothing to do with the score, it has to do with the people." John C. Maxwell, New York Times bestselling author and speaker:
"Players First captures why so many kids want to play for John Calipari and why so many mothers and fathers ask him to take their boys and mold them into young men. Through stories and examples, Coach Cal brings out his most important teaching tool, which is servant leadership. Teaching these young people to care more about others than themselves is what sets his program apart and what sets this book apart from other coaches' books. It's a must-read." Ken Blanchard, coauthor of The One Minute Manager(R), Leading at a Higher Level, and TrustWorks!
"I've been an admirer and friend of John Calipari for over thirty years--ever since his coaching days at the University of Massachusetts, where I was a professor. I've watched Cal and his wife, Ellen, treat his players as family and help bring out their best, not only on the court but also in their future lives as spouses, parents, friends, business leaders, and contributors to their communities. Players First is not just for sports fans--it's for anyone who is open to learn that viewing your people as your number one customer is the key to long-term success. Wins and profits are the byproducts of putting your players/people first. I love this book--and so will you and the people you care about and count on at home, at work, and in the community where you live. Thanks, Cal." Sam Cassell, three-time NBA champion and current Washington Wizards assistant coach
"I loved playing for Cal. He tried to put players in a position to play to their strengths, but he held guys responsible for their performance. We all benefited from his approach. As I read Players First, it brought back memories of how he coached us and why we enjoyed playing for him so much." Bob Rotella, sports psychologist and author of Golf is Not a Game of Perfect
"I've been working with Coach Cal and his teams for about 20 years now and have loved every minute of it. Two things have drawn me to Coach Cal over the years: one, he chases excellence and greatness, and two, I love the way he cares about his players and treats the people around him. Players First gives a very honest picture of what's important to Coach Cal and why he's so great at taking young athletes, developing them into mature players and helping them reach their potential." Reseńa del editor:

John Calipari, one of the most successful coaches in NCAA history, presents the world of college basketball from the coach's chair, unvarnished and straight from the heart.Players First is Calipari's account of his first six years coaching the University of Kentucky men's team, leading it to a national championship in 2012 and the championship game in 2014, all while dealing with the realities of the "one-and-done" mentality and an NCAA that sometimes seems to put players last. Filled with revelatory stories about what it takes to succeed at the highest level of the college game,Players First is a candid look at the great players and rivalries that have filled Calipari's life with joy and a sense of purpose.

1. PLAYERS FIRST: COACHING FROM THE

2. PLAYERS FIRST: COACHING FROM THE

3. PLAYERS FIRST: COACHING FROM THE

4. Players First: Coaching from the Inside Out

5. PLAYERS FIRST: COACHING FROM THE

6. PLAYERS FIRST: COACHING FROM THE

7. PLAYERS FIRST: COACHING FROM THE

8. Players First: Coaching from the Inside Out

9. PLAYERS FIRST: COACHING FROM THE

10. Players First: Coaching from the Inside Out