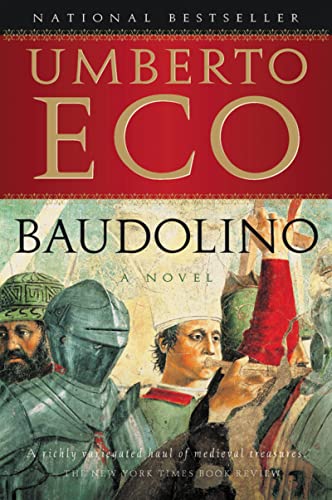 "Eco puts forth the question that perpetually beguiles him and with which he perpetually beguiles the rest of us: If a teller of tales tells us he's telling the truth, how can we know for sure what really happened?"-The New Yorker "Baudolino manifests many of the exuberant extravagances that made The Name of the Rose so hugely enjoyable." - -Iain Pears, Los Angeles Times Book Review Reseńa del editor:

Born a simple peasant in northern Italy, Baudolino, a young man with a gift for languages and a talent for lying, narrates the story of his life, from his meeting with and adoption by Emperor Frederick Barbarossa, his education in Paris, his and his companions' search for the legendary priest-king Prester John, and his arrival in Constantinople during the turmoil of the Fourth Crusade. Reprint. 125,000 first printing.

Buchbeschreibung Soft cover. Zustand: New. No Jacket. First US Paper. In 1204, the knights of the fourth Crusade are sacking Constantinople. Baudolino saves a historian and high court official from certain death. He and his associates then set out in search of Prester John, a legendary priest-king said to rule a vast kingdom in the East. By the author of &#34;Name of the Rose.&#34; 527 pages. Published @ $15.00. Bestandsnummer des Verkäufers 016979