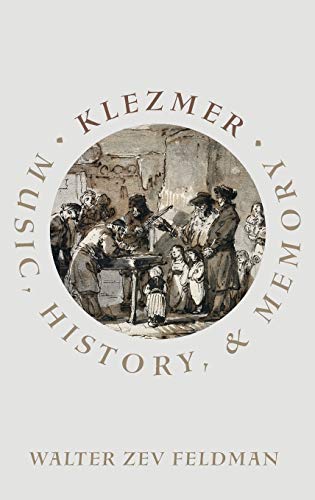 [an] outstanding work of scholarship (Robert A. Rothstein, Slavic Review)

Much of the fieldwork carried out by Russian scholars such as Moyshe Beregovski (1892-1961), to whom Feldman dedicates his book, remain hidden away in former Soviet libraries. Until this can be accessed, Feldman's detailed study will remain the go-to work for anyone wishing to understand or explore this endlessly suggestive subject. (Mark Glanville , Jewish Quarterly)

Klezmer: Music, History, and Memory is the first comprehensive study of the musical structure and social history of klezmer music, the music of the Jewish musicians' guild of Eastern Europe. Emerging in 16th century Prague, the klezmer became a central cultural feature of the largest transnational Jewish community of modern times - the Ashkenazim of Eastern Europe. Much of the musical and choreographic history of the Ashkenazim is embedded in the klezmer repertoire, which functioned as a kind of non-verbal communal memory. The complex of speech, dance, and musical gesture is deeply rooted in Jewish expressive culture, and reached its highest development in Eastern Europe. Klezmer: Music, History, and Memory reveals the artistic transformations of the liturgy of the Ashkenazic synagogue in klezmer wedding melodies, and presents the most extended study available in any language of the relationship of Jewish dance to the rich and varied klezmer music of Eastern Europe.

Author Walter Zev Feldman expertly examines the major sources principally in Russian, Yiddish, Hebrew, and Romanian from the 16th to the 20th centuries, including interviews with authoritative European-born klezmorim conducted over a period of more than thirty years in America, Eastern Europe, and Israel. In its musical analysis, this book draws upon the foundational collections of the late Tsarist and early Soviet periods, plus rare cantorial and klezmer manuscripts from the late 18th to the early 20th centuries.