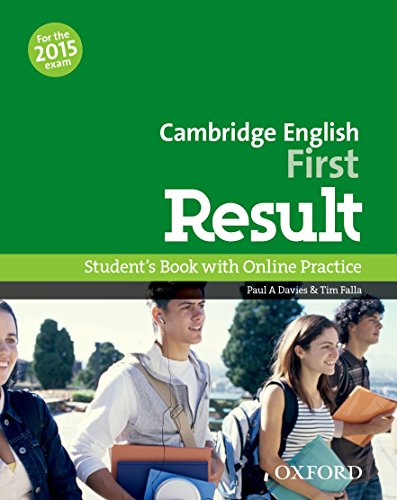 The Student's Book is motivating and engaging, using striking visuals to stimulate student involvement and discussion and to retain their interest throughout. Each unit has a clear layout and consistent structure, covering the four key communication skills as well as Grammar, Vocabulary, Use of English, and a Review. To help develop independent learning skills, model answers are provided and the dictionary skills work is thoroughly integrated. A Grammar Reference and a Writing Guide are included in the back of the Student's Book, and the clear exam labelling, tips, strategies and exam-type practice make this ideal for exam preparation. The skills areas in each unit are not graded, so can be used in any order, and are ready to use, straight from the page for maximum flexibility and variety.

Paul A Davies was born in Croydon, a suburb of London, in 1965. He was educated at Trinity College Oxford and, having graduated in English and Modern Languages, began his teaching career in Spain. On returning to the UK, he found a job at Oxford University Press, first as a lexicographer on bilingual dictionaries and then as a schoolbook editor with a particular responsibility for Turkey and Greece. After five years' publishing experience, he decided to leave OUP to begin a freelance career writing English-teaching material. That was in 1998. Since then, he has written primary and secondary courses for most major English-teaching markets around the world, as well as videos, plays, stories and multimedia material. For Europe, his main publications have been the secondary courses Spotlight and Solutions and the primary course Sparks, all published by OUP. His publications for Latin America include the secondary course Flashlight (OUP) and two primary courses: All Aboard! (Macmillan) and Zabadoo (OUP). He has experience of writing books for both the American English and the British English markets. The majority of his books written for students of secondary school age have been co-authored with Tim Falla.Tim Falla graduated from Oxford University with a BA Honours degree in Modern Languages. He took a Post Graduate Certificate in Education in English for Speakers of Other Languages at London University and taught in Japan, the UK, Spain, and Saudi Arabia.From 1988 until 1992 he was an editor in the ELT Division of Oxford University Press. Since then he has worked as a freelance author.His publications with Oxford University Press include Thumbs Up! and Open Roads (with Norman Whitney), Pre-select (with David Bolton), Headway Beginner Workbook, Headway Elementary and Pre-Intermediate Videos and Video Activity Books, Watch This! 1 and 2 Student's and Teacher's Books.

Buchbeschreibung Zustand: New. Brand New Original US Edition.We Ship to PO BOX Address also. EXPEDITED shipping option also available for faster delivery.This item may ship fro the US or other locations in India depending on your location and availability. Bestandsnummer des Verkäufers AUDUU-41351

Buchbeschreibung Zustand: New. Brand New Original US Edition.We Ship to PO BOX Address also. EXPEDITED shipping option also available for faster delivery.This item may ship fro the US or other locations in India depending on your location and availability. Bestandsnummer des Verkäufers AUDUU-174445

Buchbeschreibung 2014. Compact Disc. Zustand: New. Compact Disc. Cambridge: English First Result is fully updated to prepare students for success in the new 2015 exam. The contemporary topics, lively texts and vibrant design keep students motivated a.Shipping may be from multiple locations in the US or from the UK, depending on stock availability. 0.534. Bestandsnummer des Verkäufers 9780194511926