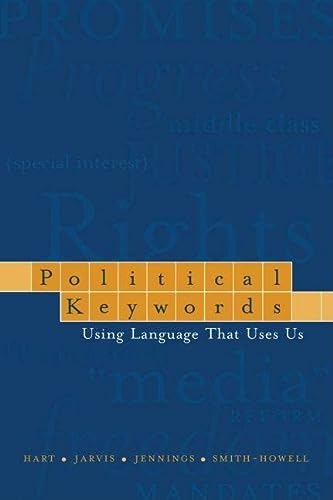 The Declaration of Independence states that all men are created equal in the United States, but that statement does not hold true for words. Some words carry more weight than others―they seem to work harder, get more done, and demand more respect. Political Keywords: Using Language that Uses Us looks at eight dominant words that are crucial to American political discourse, and how they have been employed during the last fifty years.
Based on an analysis of eleven separate studies of political language, Political Keywords helps readers to understand what these terms mean and how they are used. For example, the book tracks what politics now means to modern commentators, how schoolteacher impress certain values upon the nation's children by invoking the office of the president, and why an innocent word like government sometimes makes people so upset. It details how the people are referenced in political talk and how the media portray themselves. The book also considers the work done by political parties, political promises, and political consultants because, together, they shed special light on modern elections. Combining social science with subtle forms of cultural interpretation, Political Keywords: UsingLanguage that Uses Us provides a fresh look at both American politics and American language. It is an ideal text for undergraduate and graduate courses in political communication, political language, political campaigns, media and politics, political psychology, public opinion, rhetorical criticism, contemporary public address, and presidential rhetoric.

offers a fresh understanding of American politicsand American language. The result is a book with vision and breadth, one suited to readers from a wide variety of backgrounds.