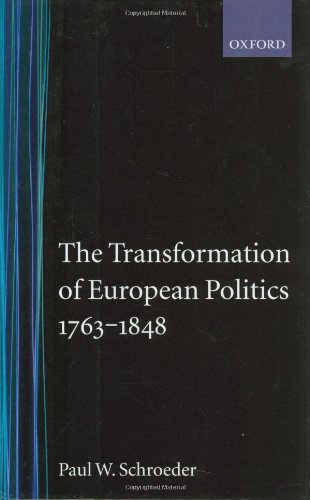 'It is the highest praise to say that this book is a worthy successor to Taylor's original volume. Sometimes, despite the forty-year gap, Schroeder's insights connect very directly with those of Taylor ... he has made as good a case as has been made in recent years for treating international history as an important discipline in its own right.'Times Literary Supplement

Schroeder's magisterial work is already justly acclaimed as a classic ... the book is well structured, clearly written and organised by a number of central theses ... this volume will long stand deservedly as a classic and is unlikely to be matched at this length ... Schroeder both has a truly European range and spans the gulf between history and political science. He achieves both more fully than any other scholar. Those who are expert in the subject will recognise the brilliance and the scholarship of this volume. (Times Higher Educational Supplement)

Schroeder gives a new and positive interpretation to the concept of the `concert' of Europe. (History Today)

rather a lengthy but highly readable and provicative examination of the development of international relations during that period. The book is strewn with rejected traditional interpretations and discarded scholarly truisms...Schroeder delights in iconoclasm. That is part of the charm of this book which makes it such fun to read...stimulating and challenging book. (The Historian)

a survey of European diplomacy over the previous eight-five years which has all the power and authority of taylor's work, together with his argumentativeness and sense of paradox...provocative and informed by an overarching theory...an indispensable work of reference, a sure-footed guide through the intricacies of great power politics, a much needed new account of the Congress of Vienna and Congress era in particular, and a monument of scholarship and stamina. (French History 9:2)

Professor Schroeder has shown himself equal to the challenge, providing a survey of European diplomacy over the previous eighty-five years which has all the power and authority of Taylor's work, together with his argumentativeness and sense of paradox. If it is less outrageous and crafted with more patience, worked like wrought iron, to use Schroeder's own analogy, it is nonetheless provocative and informed by an overarching theory. (R.N. Gildea, Merton College, Oxford)

Until now Paul Schroeder has been known as a good historian; henceforward he will be remembered as a great one. Dazzling in its concepts and masterly in its execution, The Transformation of European Politics is a sweeping review of the international history of Europe from the end of the Seven Years' War to the revolutions of 1848. Certain to be essential for all students and scholars working on this period, its extraordinary breadth of vision, entertaining language and penetrating insights must surely guarantee it recognition as a classic of twentieth-century historiography ... a work of untrammelled brilliance whose author deserves not only the utmost credit but also the thanks and admiration of the entire historical community; there can, in consequence, be no doubt that it will remain the standard work for many years to come. (Charles Esdaile, University of Liverpool, European Review of History-Revue européenne d'histoire Vol. 3 No. 2)

elegantly written ... What makes this volume so admirable and persuasive is that it is both based on the deepest imaginable reading, including study in archives, and also embodies the results of remorseless thinking about every twist and turn of international affairs, and much else, thoughout this complicated period. Schroeder takes no established opinion for granted. He probes incessantly the motives of all concerned. What he has to say about every one of the numerous crises and incidents he discusses is at once learned and profound, penetrating and decisive, always fresh and often brilliantly original. It is certainly a provocative book ... exceptionally accurate, superbly planned and splendidly written ... It is a genuinely great book. (Derek Beales, Sidney Sussex College, Cambridge, EHR Apr.96)

This is the only modern study of European politics to cover the entire timespan from the end of the Seven Years' War in 1763 to the revolutionary year of 1848. Paul Schroeder's comprehensive and authoritative volume charts the course of international history over this turbulent period, in which the map of Europe was redrawn time and again. Professor Schroeder examines the wars, political crises, and diplomatic opportunities of the age, many of which - the Revolutionary and Napoleonic Wars, the Congress of Vienna and its aftermath - had far-reaching consequences for modern Europe.