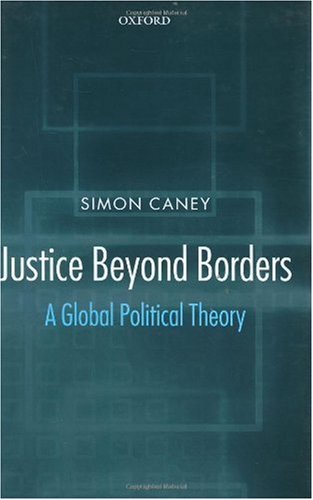 Defending a cosmopolitan approach to global political theory against its three main rivals realism, nationalism, and the society-of-states tradition Caney discusses six topics on which these approaches diverge: the existence of universal moral values, civil and political human rights, universal principles of distributive justice, the design of the global institutional order, just war theory, and humanitarian intervention. Caneys success in covering such a vast range of topics and approaches is truly impressive: He shows dazzling mastery of the relevant literatures from Kant to Kennan, from Aokas Edicts to the Tobin Tax. He achieves great lucidity especially in the structural design of the book and its parts. The cosmopolitan position he develops has coherence and plausibility. And his specific arguments are clear and forceful ... (Ethics and International Affairs)

Justice Beyond Borders is a remarkable accomplishment. It provides the best defense of a cosmopolitan approach to justice since Charles Beitz's Political Theory and International Relations. It is extraordinarily clear, balanced, and insightful, and exhibits a mastery of several relevant literatures. (Allen Buchanan, Professor of Public Policy and Philosophy, Duke University)

This is an impressive and important book that goes a long way towards articulating and defending a cosmopolitan approach to world politics. It is original, engaging and well researcher. (Alex J. Bellamy, Lecturer in Peace and Conflict Studies, University of Queensland)

Justice Beyond Borders examines which political principles should govern global politics. It explores the ethical issues that arise at the global level and addresses questions such as: Are there universal values? If so, what are they? What human rights, if any, are there? Are there global principles of distributive justice? Should there be a system of supra-state institutions? Is national self-determination defensible? When, if ever, may political regimes wage war? Is humanitarian intervention justified? Justice Beyond Borders outlines and defends an egalitarian liberal brand of cosmopolitanism to address these questions. It maintains that there are universal principles. It argues, moreover, that these include universal civil and political human rights. It also defends the application of global principles of distributive justice. On this basis, it argues for a system of supra-state political institutions to further promote these universal principles of justice. Having set out principles of ideal theory, it then examines what principles should apply when injustices are committed. To do this it examines when political regimes may wage war and when they may engage in intervention. It thereby draws on cosmopolitan principles to derive and defend a cosmopolitan conception of just war and humanitarian intervention. To arrive at these conclusions, Justice Beyond Borders engages in a sustained analysis of the competing arguments on all the above issues, examining the arguments of nationalists, realists, and those who affirm the ideal of a society of states. It does so by exploring and integrating the work of philosophers, political theorists, and international relations scholars. It illustrates its ethical argument and theoretical analysis with empirical examples. Furthermore, Justice Beyond Borders argues that the issues examined in the book cannot be adequately treated in isolation from each other but must be treated as an interlinked whole.