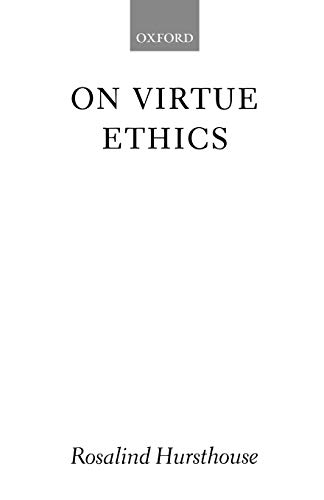 'This splendid new book by Rosalind Hursthouse describes a programme for the development of a particular ("Aristotelian") form of virtue ethics. It is intended to be used as a textbook, but should be read by anyone interested in moral philosophy. Hursthouse has been a major contributor to the development of virtue ethics, and the programme she describes, while making use of the many contributions of others, is very much her own, with numerous new ideas and insights.' (Gilbert Harman, Times Literary Supplement)

'Rosalind Hursthouse's study of virtue ethics is an exceptionally clear and refreshing treatment of the subject. Fully informed and engaged with the best of contemporary moral philosophy, it breathes philosophical life into the conversation between virtue ethics and Kantian or utilitarian inspired alternatives. Hursthouse's uncommon insight into the texture of ethical life connects the claims of virtue theory with the ways most of us do think about morality and, especially, with the moral tale we tell our children.' (Barbara Herman, University of California, Los Angeles)

'With this book virtue ethics finally comes of age. Hursthouse elegantly dispels the aura of unattractive high-mindedness that has clung to the approach. Firmly rebutting both psychological and moral criticisms, she shows how the life of the virtuous is both possible and even enjoyable. This volume will effortlessly take its place as the defining exposition of the view.' (Simon Blackburn, University of North Carolina)

Virtue ethics is perhaps the most important development within late twentieth-century moral philosophy. Rosalind Hursthouse, who has made notable contributions to this development, now presents a full exposition and defence of her neo-Aristotelian version of virtue ethics. She shows how virtue ethics can provide guidance for action, illuminate moral dilemmas, and bring out the moral significance of the emotions. Deliberately avoiding a combative stance, she finds less disagreement between Kantian and neo-Aristotelian approaches than is usual, and she offers the first account from a virtue ethics perspective of acting 'from a sense of duty'. She considers the question which character traits are virtues, and explores how answers to this question can be justified by appeal to facts about human nature. Written in a clear, engaging style which makes it accessible to non-specialists, On Virtue Ethics will appeal to anyone with an interest in moral philosophy.