Verwandte Artikel zu The Oxford History of the French Revolution

Doyle, William The Oxford History of the French Revolution

The Oxford History of the French Revolution 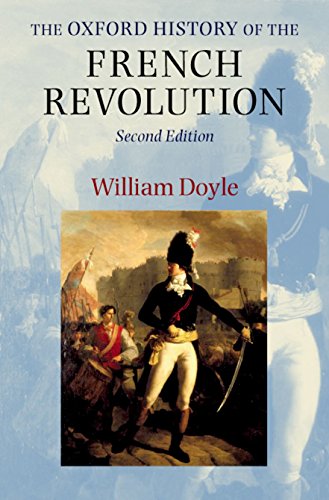 Doyle's book, in its readability, its clarity and its balance, is certainly the best of the general studies of the Revolution that have recently appeared; it will appeal both to the general reader and to the historian. And it deals with the subject, rather than with those who have already written about it. (Richard Griffiths, Times Higher Educational Supplement)

. . . a work of breath-taking range which deserves to reach a wide popular market. It is the fullest history to appear of the Revolutionary era, of the events preceding it and of its impact on a wider world. Masterfully written. (The Observer)

He writes lucidly and gracefully, with balance and good judgement . . . offers valuable insights into the shadows that the Revolution cast across the century that followed it. (Philip Zeigler, Weekend Telegraph)

Doyle has produced a wonderfully lucid, authoritative and balanced history, ornamented with all the scholarly apparatus one would expect from an Oxford history. (Linda Colley, London Review of Books)

. . . first-rate synthesis . . . The strengths of the book are its firm narrative thread, its measured tone and the extraordinary distillation of knowledge contained in each chapter. The author's familiarity with ongoing research in the field of French revolutionary history is nearly total; the fruits of many historians' labours are deftly summarised, received opinions modified, alternative judgments formulated. In terms of sheer coverage, the book is difficult to fault. Not only is the life of revolutionary France captured in these pages, but that of much of Europe as well. (New Statesman)

efficient book . . . William Doyle's account of the course of the Revolution is solid and up-to-date, and will make an excellent textbook. (Norman Stone, Sunday Times)

For readers who need a fairly brisk, non-digressive account of events after the accession of Louis XVI up to Napoleon and the peace of Amiens in 1802, this compact book, by the professor and chairman of the school of history at Bristol University, is the answer. (Anthony Curtis, Financial Times)

. . . an excellent text for the early part of the Revolution. (London Evening Standard)

This new edition of the most authoritative, comprehensive history of the French Revolution of 1789 draws on a generation of extensive research and scholarly debate to reappraise the most famous of all revolutions. Updates for this second edition include a generous chronology of events, plus an extended bibliographical essay providing an examination of the historiography of the Revolution.

Opening with the accession of Louis XVI in 1774, the book traces the history of France through revolution, terror, and counter-revolution, to the triumph of Napoleon in 1802, and analyses the impact of events both in France itself and the rest of Europe.

William Doyle shows how a movement which began with optimism and general enthusiasm soon became a tragedy, not only for the ruling orders, but for the millions of ordinary people all over Europe whose lives were disrupted by religious upheaval, and civil and international war. It was they who paid the price for the destruction of the old political order and the struggle to establish a new one, based on the ideals of liberty and revolution, in the face of widespread indifference and hostility.

1. The Oxford History of the French Revolution

2. THE OXFORD HISTORY OF THE FRENCH