Verwandte Artikel zu What Women Want: An Agenda for the Women's Movement

Rhode, Deborah L. What Women Want: An Agenda for the Women's Movement

What Women Want: An Agenda for the Women's Movement 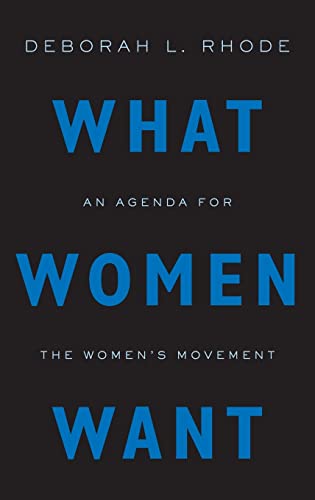 Rhodes book is an excellent introduction to public policy issues as they pertain to women in the US. Rhode (Stanford Univ.) covers the history of the womens movement and provides a state-of-the-art literature review of the legal and political issues women face today. (N. K. Mitchell, Prairie View A&M University, CHOICE)

What Women Want brings new insights to longstanding questions of gender inequality. One of the nation's preeminent experts on women and the law offers a compelling agenda for the women's movement. With elegant and engaging prose, Rhode tackles issues such as pay inequity, work/family conflicts, violence against women, and economic and reproductive justice. This book is essential reading for anyone who cares about equal opportunity for women. (Kim Gandy, National Organization for Women, President 2001-2009)

As she has done for decades, Deborah Rhode argues again persuasively that American women still face a grinding uphill battle. We are paid less, work harder, experience greater violence, report less violence, and lack crucial policies and services long-established in other developed countries. Passionately articulated, unsentimental and clear-eyed, Rhode proves that What Women Want -whatever they may choose to call it - is feminism. (Dahlia Lithwick, Supreme Court Correspondent, Slate)

If you have any doubt that gender inequality persists in today's world, you won't after reading this evocative, data-packed book. What Women Want is the most comprehensive account of gender inequality out there. But Rhode goes beyond describing the problem; she offers compelling advice for achieving a gender equitable society. (Shelley J. Correll, Director, Clayman Institute for Gender Research and Professor of Sociology, Stanford University)

Whenever I need the latest statistic or the perfect quote on an extraordinarily broad range of feminist issues, I reach for the latest Deborah Rhode book. (Joan C. Williams, Distinguished Professor of Law, UC Hastings Foundation Chair, and Founding Director of the Center for WorkLife Law, UC Hastings College of the Law)

A thoroughly researched examination of the progress women in the United States have made toward gender equality and of the problems that still must be addressed. (Kirkus Reviews)

Rhode's book is a contemporary version of Susan Faludi's 1991 Backlash. Instead of giving us an account of the progress women have made toward social and political equality, it concentrates on all in our society that remains resistant to that progress. (Boston Review)

American women fare worse than men on virtually every major dimension of social status, financial wellbeing, and physical safety. Sexual violence remains common, and reproductive rights are by no means secure. Women assume disproportionate burdens in the home and pay a heavy price in the workplace. Yet these issues are not political priorities, and worse, there is a lack of consensus that there still is a serious problem, or at least one that women have any reason or capacity to address. This 'no problem' problem helps explain why women fail to mobilize around issues that materially affect the quality of their lives. Why is this, why does it matter, and how can we best respond?

What Women Want focuses on the policy agenda for women. Deborah L. Rhode, one of the nation's leading scholars on women and law, brings to the discussion a broad array of interdisciplinary research as well as interviews with heads of leading women's organizations. Key questions addressed include whether the women's movement is stalled. What are the major obstacles it confronts? What are its key priorities and what strategies might advance them? In addressing those questions, the book explores virtually all of the major policy issues confronting women. Topics include employment and appearance discrimination, the gender gap in pay and leadership opportunities, work/family policies, childcare, divorce, same- sex marriage, sexual harassment, domestic violence, rape, trafficking, abortion, poverty, and politics. Discussion focuses on the capacities and limits of law as a strategy for social change. Why, despite four decades of enforcement of equal employment legislation, is women's workplace status so far from equal? Why, despite a quarter century's effort at reforming rape law, is America's rate of reported rape the second highest in the developed world? Part of the problem lies in the absence of political mobilization around such issues and the underrepresentation of women in public office. This path-breaking book explores how women can and should act on what they want.

1. What Women Want: An Agenda for the Women's Movement

2. What Women Want: An Agenda for the Women's Movement