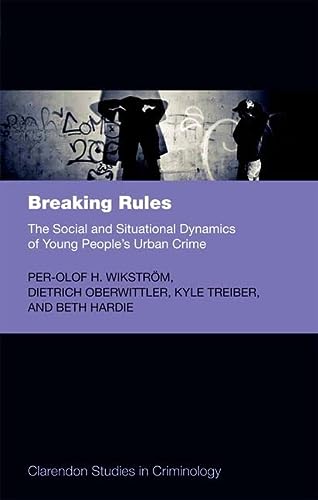 The combination of carefully crafted and consistent assumptions about human nature, an extraordinarily rich data set, an equally rich theoretical frame with clear concepts and dynamics, and a series of analyses which allow the reader to see what is happening "under the hood, " is unparalleled in this reviewer's recent memory. (Ralph B. Taylor, Criminal Law and Criminal Justice Books)

among the most significant works in criminology in decades (Professor Michael Gottfredson, University of California, As quoted in The Independent)

a breakthrough that deserves a wide readership (Professor Robert Sampson, Harvard University, as quoted in the Independent)

Breaking Rules is among the most significant works in criminology in decades. It sets the standard for sophisticated and innovative measurement, for careful and well - executed research design, and for clarity and precision of presentation. It both presents and explicates an innovative theory of crime, one that is broad in scope and appropriately ambitious. The data and their analyses are of vital importance to cumulative knowledge in criminology. With this book, Situational Action Theory takes its place as among the most important perspectives in modern criminology and the study provides data of unprecedented scope and quality.Breaking Rules represents the best tradition of the science of criminology and as such it commands the attention of the field. (Professor Michael R. Gottfredson, University of California)

Breaking Rules is a truly impressive book that combines all of the features of first-rate scholarship in the social sciences. The theorizing, in the form of Situational Action Theory (SAT), is creative. The methodological procedures are carefully crafted and skillfully executed to serve the theoretical objectives of the research. Moreover, the extensive and rich analyses of the data from the Peterborough Adolescent and Young Adult Development Study (PADS+) yield compelling insights about who commits crimes, when, where, and - most importantly - why. (Professor Steven F. Messner, University at Albany)

Criminology has produced a staggering amount of data and findings. Correlates of crime are everywhere but theoretical interpretation of their meaning is fraught with disagreement, Wikström and colleagues cut through the fog with a compelling new theory and multi-faceted longitudinal study of adolescents that lays bare the fundamental importance of situational dynamics and their interaction with both person-level characteristics and the larger social environment of the city. The theoretical emphasis on situation and individual action in context is original and the empirical analysis is carefully constructed to assess major hypotheses. Breaking Rules is a breakthrough that deserves a wide readership. (Professor Robert J. Sampson, Harvard University)

Breaking Rules presents one of the most significant recent studies of crime and offending involving young people, and should be essential reading for Howard League early career researchers. It offers a template for how good criminological research should be conducted, and affords ample material for teaching undergraduate and post-graduate criminology. (Gary Manders, Howard League for Penal Reform)

One of the most important recent studies of crime and offending involving young people and a crucial book for police officers leading or designing crime reduction or preventive strategies. (Peter Neyroud, Policing: A Journal of Policy & Practice)

Why do certain people commit acts of crime? Why does crime happen in certain places? Presenting an ambitious new study designed to test a pioneering new theory of the causes of crime, Breaking Rules: The Social and Situational Dynamics of Young People's Urban Crime demonstrates that these questions can only go so far in explaining why crime happens - and, therefore, in preventing it.

Based on the work of the Peterborough Adolescent and Young Adult Development Study (PADS+), Breaking Rules presents an analysis of the urban structure of Peterborough and its relation to young people's social life. Contemporary sciences state that behaviour is the outcome of an interaction between people and the environments to which they are exposed, and it is precisely that interaction and its relation to young people's crime involvement that PADS+ explores. Driven by a ground-breaking theory of crime, Situational Action Theory, which aims to explain why people break rules, it implements innovative methods of measuring social environments and people's exposure to them, involving a cohort of 700 young people growing up in the UK city of Peterborough. It focuses on the important adolescent time window, ages 12 to 17, during which young people's crime involvement is at its peak, using unique space-time budget data to explore young people's time use, movement patterns, and the spatio-temporal characteristics of their crime involvement.

Presenting the first study of this kind, both in breadth and detail, with significant implications for policy and prevention, Breaking Rules should not only be of great interest to academic readers, but also to policy-makers and practitioners, interested in issues of urban environments, crime within urban environments, and the role of social environments in crime causation.