The Culturalization of Human Rights Law 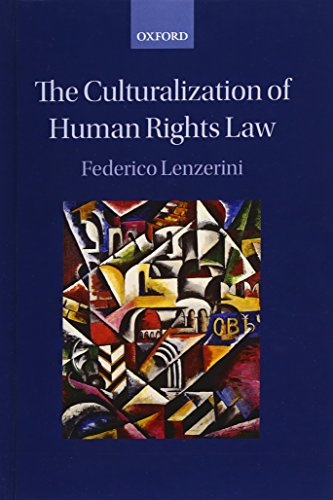 Professor Lenzerinis book offers an excellent opportunity for us to reflect on a debate that is seemingly forgotten and yet too important to ignore. (Pok Yin S. Chow, University of Nottingham, International Journal of Constitutional Law)

This book serves as a significant source for those who seek a better understanding of culture and human rights law. The extensive legal analysis presented by the author definitely furthers existing scholarship in this area. (Elisabeth Reichert, Nordic Journal of Human Rights)

The idea of multi-culturalism has had a significant impact across many areas of law. This book explores how it has shaped the recent development of international human rights law. Custodians of human rights, especially international monitoring bodies, try to advance the effectiveness of human rights standards by interpreting these standards according to a method strongly inspired by the idea of cultural 'relativism'. By using elements of cultural identity and cultural diversity as parameters for the interpretation, adjudication, and enforcement of such standards, human rights are evolving from the traditional 'universal' idea, to a 'multi-cultural' one, whereby rights are interpreted in a dynamic manner, which respond to the particular needs of the communities and individuals directly concerned.

This book shows how this is epitomized by the rise of collective rights - which is intertwined with the evolution of the rights of minorities and indigenous peoples - in contrast with the traditional vision of human rights as inherently individual. It demonstrates how the process of 'culturalization' of human rights law can be shown through different methods: the most common being the recourse to the doctrine of the 'margin of appreciation' left to states in defining the content of human rights standards, extensively used by human rights bodies, such as the European Court of Human Rights. Secondly, different meanings can be attributed to the same human rights standards by adapting them to the cultural needs of the persons and - especially - communities specifically concerned. This method is particularly used by the Inter-American Court of Human Rights and the African Commission of Human and Peoples' Rights. The book concludes that the evolution of human rights law towards multi-cultural 'relativism' is not only maximizes the effectiveness of human rights standards, but is also necessary to improve the quality of communal life, and to promote the stability of inter-cultural relationships. However, to an extent, notions of 'universalism' remain necessary to defend the very idea of human dignity.

1. The Culturalization of Human Rights Law