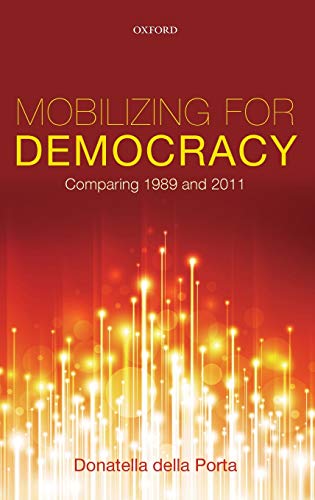 della Porta has produced an important contribution to the field of democratisation as well as social movement studies. (Thomas O'Brien, Contemporary European Studies)

Strangely enough, while the pictures used to illustrate the most recent wave of protests for democracy in North Africa represent mass protest, research on social movements and democratization have rarely interacted. This volume aims to fill this gap by looking at episodes of democratization through the lens of social movement studies. Without assuming that democratization is always produced from below, the author singles out different paths of democratization by looking at the ways in which the masses interact with the elites, and protest with bargaining: eventful democratization, participated pacts and troubled democratization. The main focus is on the first of the paths: eventful democratization, that is cases in which authoritarian regimes break down following-often short but intense-waves of protest. Recognizing the particular power of some transformative events, the analysis locates them within the broader mobilization processes, including the multitude of less visible, but still important protests that surround them. Cognitive, affective and relational mechanisms are singled out as transforming the contexts in which dissidents act. In all three paths, mobilization of resources, framing processes and appropriation of opportunities will develop in action, in different combinations. The comparison of different cases within two waves of protests for democracy, in Central Eastern Europe in 1989 and in the Middle East and North Africa in 2011, allows the author to theorize about causal mechanisms and conditions as they emerge in mobilizations for democracy.