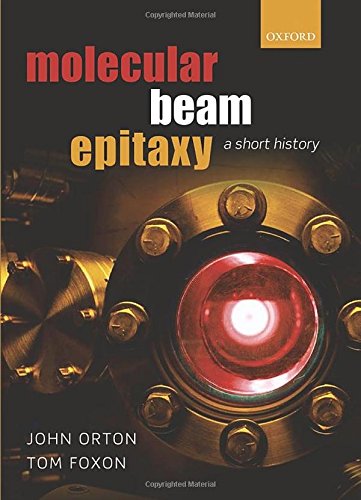 The book is written in a very clear style, which contrasts with the complexity of its subject. All the basic ideas necessary for understanding are described in the text, while well-constructed âboxesâ are provided, containing necessary mathematical equations. Experimental techniques are thoroughly described, well supported by appropriate diagrams. (Rene Bimbot, Revue d'histoire des sciences)

A fascinating historical narrative of the development of the MBE technique, within which the authors have made key contributions. The book introduces us to the major developments and the pioneering research teams in the field, along a path which runs from the earliest experiments on vacuum deposition through to modern production epitaxy. On route, we learn about the basis of the MBE process and develop a deep understanding of the fundamentals. The book is a valuable résumé of the rapid progress made during the last half century and yet also provides an important reference work for those entering this exciting field. (Mark Hopkinson, University of Sheffield, UK)

Molecular Beam Epitaxy (MBE) has become a standard technique and basic equipment is available for purchase from several manufacturers, but it was not always so. The authors of this book, both renowned in the field, take us back to the origins of the subject, starting some 50 years ago when the first tentative experiments were performed, before bringing us up-to-date. It concentrates on Si and III-V semiconductors and provides details of equipment, surface processes involved in growth and some of the important devices fabricated by this method. It is essential reading for graduate students and researchers using the technique, which since its inception has spread to include metals, oxides and many other materials, principally but not exclusively, those used in electronics and optoelectronics. (Emeritus Professor Bruce A Joyce FRS, Imperial College London, UK)

This is a superbly written, comprehensive account of the development of molecular beam epitaxy and the remarkable impact this technique has had in producing complex nano-scale semiconductor devices (Gareth Parry, Imperial College, London, UK)

The book is a history of Molecular Beam Epitaxy (MBE) as applied to the growth of semiconductor thin films (note that it does not cover the subject of metal thin films). It begins by examining the origins of MBE, first of all looking at the nature of molecular beams and considering their application to fundamental physics, to the development of nuclear magnetic resonance and to the invention of the microwave MASER. It shows how molecular beams of silane (SiH4) were used to study the nucleation of silicon films on a silicon substrate and how such studies were extended to compound semiconductors such as GaAs. From such surface studies in ultra-high vacuum the technique developed into a method of growing high quality single crystal films of a wide range of semiconductors. Comparing this with earlier evaporation methods of deposition and with other epitaxial deposition methods such as liquid phase and vapour phase epitaxy (LPE and VPE).
The text describes the development of MBE machines from the early âhome-madeâ variety to that of commercial equipment and show how MBE was gradually refined to produce high quality films with atomic dimensions. This was much aided by the use of various in-situ surface analysis techniques, such as reflection high energy electron diffraction (RHEED) and mass spectrometry, a feature unique to MBE. It looks at various modified versions of the basic MBE process, then proceed to describe their application to the growth of so-called âlow-dimensional structuresâ (LDS) based on ultra-thin heterostructure films with thickness of order a few molecular monolayers. Further chapters cover the growth of a wide range of different compounds and describe their application to fundamental physics and to the fabrication of electronic and opto-electronic devices.
The authors study the historical development of all these aspects and emphasise both the (often unexpected) manner of their discovery and development and the unique features which MBE brings to the growth of extremely complex structures with monolayer accuracy.