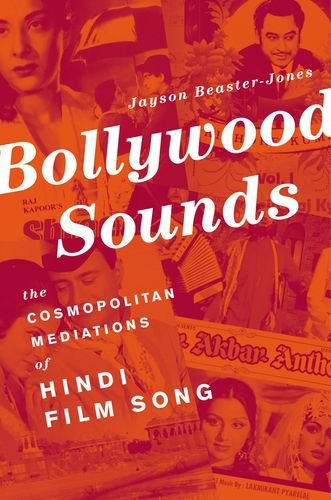 Bollywood Sounds is an exciting addition to the literature on Hindi film song. Beaster-Jones deftly weaves together song analysis, biography, and socio-political context to provide insights about meaning and style on every page. (Anna Schultz, Stanford University)

This work is destined to become a core text for the study of Indian popular music. It introduces readers to a wealth of carefully analyzed Hindi film hits, accompanied by considerations of the roles of central musical figures and historical/cultural context. It will be an indispensable starting point for scholars and students interested in the Hindi cinema and its music. It is both fascinatingly detailed and ambitiously comprehensive in scope. (Gregory Booth, co-editor of More than Bollywood (2013))

Beaster-Jones has given the first broad historical sweep of Hindi film songs from the beginning of sound film and the birth of the Indian film song in 1931 to the present day of programming, Internet and cellphones. The book's deft and articulate interweaving of analysis of the musical sounds, styles and techniques of Hindi film songs with social, economic and political change greatly enriches our understanding of this sometimes bewilderingly dynamic phenomenon. (Anna Morcom, author of Hindi Film Songs and the Cinema (2007))

The vast majority of films produced by Mumbai's commercial Hindi language film industry - known world-wide as Bollywood - feature songs as a central component of the cinematic narrative. While many critics have addressed the visual characteristics of these song sequences, very few have engaged with their aurality and with the meanings that they generate within the film narrative and within Indian society at large. Because the film songs operate as powerful sonic ambassadors to individual and cultural memories in India and abroad, however, they are significant and carefully-constructed works of art.

Bollywood Sounds focuses on the songs of Indian films in their historical, social, and commercial contexts. Author Jayson Beaster-Jones walks the reader through the highly collaborative songs, detailing the contributions of film directors, music directors and composers, lyricists, musicians, and singers. A vital component of film promotion on broadcast media, Bollywood songs are distributed on soundtracks by music companies, and have long been the most popular music genre in India - even among listeners who rarely see the movies. Through close musical and multimedia analysis of more than twenty landmark compositions, Bollywood Sounds illustrates how the producers of Indian film songs mediate a variety of influences, musical styles, instruments, and performance practices to create this distinctive genre. Beaster-Jones argues that, even from the moment of its inception, the film song genre has always been in the unique position of demonstrating cosmopolitan orientations while maintaining discrete sound and production practices over its long history. As a survey of the music of seventy years of Hindi films, Bollywood Sounds is the first monograph to provide a long-term historical insights into Hindi film songs, and their musical and cinematic conventions, in ways that will appeal both to scholars and newcomers to Indian cinema.

Buchbeschreibung Oxford University Press, 2021. Zustand: NEW. 9780199993468 This listing is a new book, a title currently in-print which we order directly and immediately from the publisher. Print on Demand title, produced to the highest standard, and there would be a delay in dispatch of around 10 working days. For all enquiries, please contact Herb Tandree Philosophy Books directly - customer service is our primary goal. Bestandsnummer des Verkðufers HTANDREE01591197