The letters of Horace Walpole; earl of Orford Volume 2 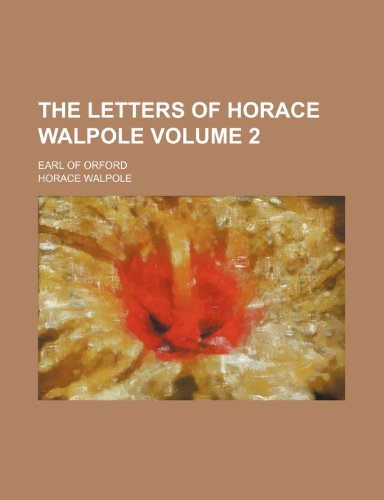 This historic book may have numerous typos and missing text. Purchasers can download a free scanned copy of the original book (without typos) from the publisher. Not indexed. Not illustrated. 1861 edition. Excerpt: ... was much frightened; it could not be for fear of what other brides dread happening, but for fear it should not happen. My evening yesterday was employed, how wisely do you think? in trying to procure for the Duchess of Portland a scarlet spider from Admiral Boscawen.' I had just seen her collection, which is 1 See Letter to Montagu, 28 Aug. 1752.--Cunningham.-See 'Gentleman's Magazine' for 1751, p. 234.--Cunningham. 3 Admiral Edward Boscawen, fifth son of Hugh, Viscount Falmouth. lie died 10 January, 1761. Sec p. 148.--Cunningham. s indeed magnificent, chiefly composed of the spoils of her father's, and the Arundel collections. The gems of all sorts are glorious. I was diverted with two relics of St. Charles the Martyr; one, the pearl you see in his pictures, taken out of his ear after his foolish head was off; the other, the cup out of which he took his last sacrament. They should be given to that nursery of nonsense and bigotry, Oxford. I condole with you on your journey, am glad Miss Montagu is in better health, and am yours sincerely. 325. TO THE REV. JOSEPH SPENCE. Dear Sie: Arlington Street, June 3, 1751. I Have translated the lines, and send them to you; but the expressive conciseness and beauty of the original, and my disuse of turning verses, made it so difficult, that I beg they may be of no other use than that of showing you how readily I complied with your request. Illam, qnicquid agit, quoquo vestigia vertit, Componit furtim subsequiturque decor. If she but moves or looks, her step, her face, By stealth adopt unmeditated grace. There are twenty little literal variations that may be made, and are of no consequence, as move or look; air instead of step, and adopts instead of adopt: I don't know even whether I would not read steal and...

The letters of Horace Walpole; earl of Orford Volume 2