Verwandte Artikel zu The Wycliffites; or, England in the fifteenth century

Mackay, Margaret The Wycliffites; or, England in the fifteenth century

The Wycliffites; or, England in the fifteenth century 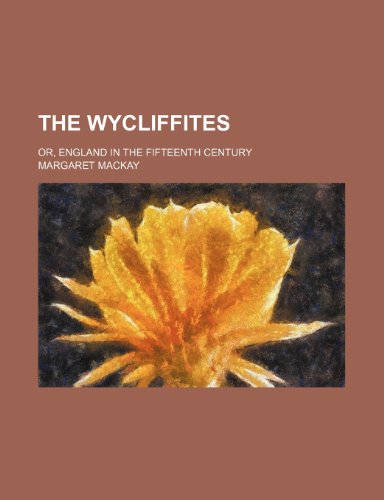 This historic book may have numerous typos and missing text. Purchasers can download a free scanned copy of the original book (without typos) from the publisher. Not indexed. Not illustrated. 1847 Excerpt: ...those heretics!" But in a case like the present, all conjecture was at fault The confessor had left Lambeth, accompanied only by the lady, and she had arrived at home in safety while no tidings of him had been received. The prior's exemplary patience was now entirely exhausted; and having perused the letters from Lambeth, he made known their contents to his monks, and a rigorous inquiry was set on foot. One of the brethren was first sent to the house of Walter Dish, where they heard Swinderby had arrived. All the information gathered there, was that the confessor had been seen to leave the house in company with Sir Henry Pierrepoint's man Blondel, and that the page had returned alone in about an hour after. They asked no questions, as they supposed the holy man had proceeded on his way, and they had not suspected anything unusual in his disappearance. The priest returned to his superior with this scanty information; and suspicions, dark as they were vague, were speedily excited. Every exertion must be made to unveil the mystery of the brother's fate. The faithful were aroused throughout the whole neighborhood; but no farther information crowned their efforts, except that some one had observed the confessor and the serving man going towards the neighboring wood. But every one thought it their duty to do something, and zeal was soon rewarded by the discovery of Swinderby's discarded vestment, found where he himself had cast it. The garment was triumphantly carried to the priory, and created considerable dismay. Had, then, the brother laid violent hands upon himself? Such a supposition could not be entertained for a moment. Had he suffered at the hands of others? If he had been murdered, why should his gown, unrent, and bearing no marks of violence, be th...