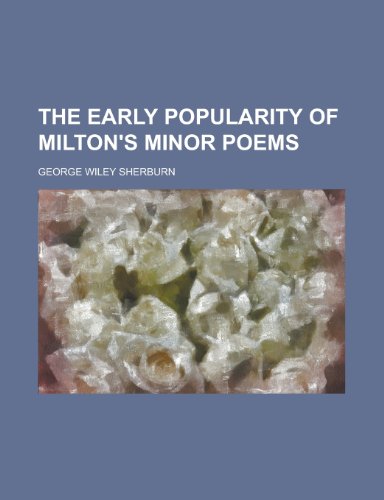 This historic book may have numerous typos and missing text. Purchasers can usually download a free scanned copy of the original book (without typos) from the publisher. Not indexed. Not illustrated. 1920 edition. Excerpt: ...of Milton's minor poems, or, to be more exact, of "L'Allegro" and "Il Penseroso" around 1750 do not necessarily imply a sudden awakening to the merits of these poems; the fact is merely that, Horace's Satires and Ovid's Heroides 1A very interesting comment on some phases of imitation may be found in the University of North Carolina Studies in Philology. XV. 195-206: "Imitation of Spenser and Milton in the early Eighteenth Century: a new Document," by R. S. Crane. having had their day, poets moved on to Boileau, Fontenelle, La Fontaine, Spenser, Cowley, Butler, and Milton. The early imitations of the minor poems here to be cited consist mainly of phrasal echoes. In fact, it is difficult to distinguish structural imitation of most of the poems, because they themselves follow well-established types. One cannot tell surely whether a pastoral elegy follows "Lycidas," Theocritus, Bion, Virgil, Sannazaro, or Spenser. Imitations of "L'Allegro," "Il Penseroso," and "Comus" are perhaps easiest to detect, a fact which may explain in part why more of them have been noted. Someone may observe that the parallels here noted are mainly later than 1700. It is true that the poetry read from the seventeenth century has yielded slight return, whereas the early eighteenth-century parallels seem inexhaustible.1 Organization of the citations again is a problem. Since the passages from Milton are not to be printed, it seems wise to arrange the parallels in the order of the passages which they recall. This method, of course, is faulty because not infrequently two different Milton poems--sometimes three--are reflected in one passage. A rough chronological summary may be given. From the...