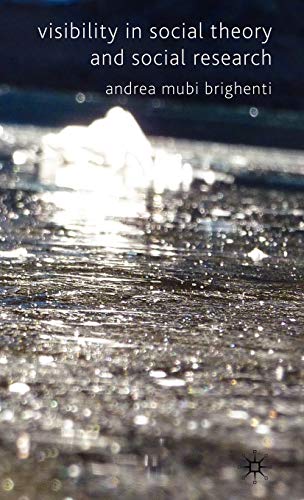 "Brighenti is clearly an intellectual who is very widely read in various languages. This is a serious book from an erudite person who

'A fascinating tour that makes visibility visible - in electronic media, the public realm, urban spaces and in the expanding world of surveillance. Interacting with an array of theorists, Brighenti reveals how visibility is both socio-technical and bio-political and, importantly, vital to today's democratic project.' - Professor David Lyon, Queen's University, Canada

'At the intersection of political philosophy, social theory, urban, media and surveillance studies, this erudite, yet elegantly written book explores the vast territories of visibility in systematic fashion. In continuous dialogue with Tarde, Foucault and Deleuze, this sightseeing tour is a genuine tour de force. Thanks to its breadth, depth and theoretical intelligence, It may well become a foundational document of visibility studies.' - Frederic Vandenberghe, University Research Institute of Rio de Janeiro, Brazil

'Comprehensive in scope and clear in exposition, this book unites various strands of social theory under a new and important question: the distinction between what can be seen and what remains hidden. Andrea Brighenti charts new territory and makes numerous issues visible in a novel light.' - Peter Wagner, ICREA Research Professor, University of Barcelona, Spain

What is social visibility? How does it affect people and public issues? How are visibility regimes created, organized and contested? Tackling both social theory and social research, the book is an exploration into how intervisibilities produce crucial sociotechnical and biopolitical effects.