Petrini, Carlo Slow Food - The Case for Taste (Arts and Traditions of the Table: Perspectives on Culinary History)

Slow Food - The Case for Taste (Arts and Traditions of the Table: Perspectives on Culinary History) 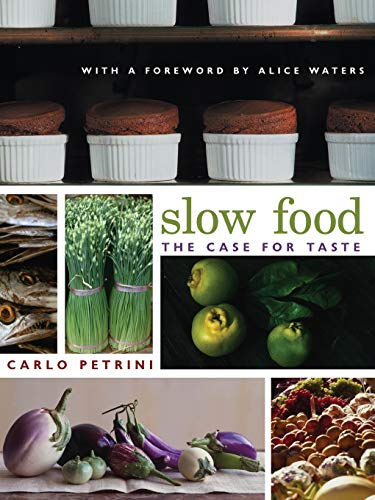 Neither a cookbook nor a foodie memoir, Slow Food is nevertheless an important work... Petrini's work is both a philosophical treatise and a history of the movement all in one slim volume, yet it suffices. Library Journal (starred review) I always felt like Groucho Marx, who said he would never join a club that'd have him as a member, but Slow Food is far more spiritual, nay, religious, than any club (or religion, for that matter) I have been asked to join. Count me in. Carlo Petrini's Slow Food out-Prousts Proust, out-LaRousses LaRousse and out-Artusis Artusi and makes sense for the dreamers and doers of our times. -- Mario Batali Everyone who enjoys quality time with fine wines and food should enjoy this book. -- Robert Mondavi If eating is such an intimate, internal process, shouldn't we take the utmost care in selecting everything we consume? Petrini makes persuasive arguments for doing just that. -- Maria C. Hunt San Diego Tribune Petrini writes with a seasoned eye for telling detail, and a willingness to provide shocking sweets for his presumed anti-globalization readership...At 155 pages, Slow Food may tempt you to race through it, eager to get to the appendices with mouthwatering examples of products to die for...and descriptions of exotic delicacies from around the world. The 'Slow Read' movement advises you to take your time. -- Carlin Romano Philadelphia Inquirer Petrini tells the story of the movement's origins and successes inSlow Food: The Case for Taste... The book also outlines the philosophy behind good eating. Bell'Italia Magazine "Petrini--an Italian whose charming prose ripples with gustatory rapture and thrasonical outbursts--pleads with us to slow down" -- Mark Winne In These Times

Take a breath...Read slowly. How often in the course and crush of our daily lives do we afford ourselves moments to truly relish-to truly be present in-the act of preparing and eating food? For most of us, our enjoyment of food has fallen victim to the frenetic pace of our lives and to our increasing estrangement, in a complex commercial economy, from the natural processes by which food is grown and produced. Packaged, artificial, and unhealthful, fast food is only the most dramatic example of the degradation of food in our lives, and of the deeper threats to our cultural, political, and environmental well-being. In 1986, Carlo Petrini decided to resist the steady march of fast food and all that it represents when he organized a protest against the building of a McDonald's near the Spanish Steps in Rome. Armed with bowls of penne, Petrini and his supporters spawned a phenomenon. Three years later Petrini founded the International Slow Food Movement, renouncing not only fast food but also the overall pace of the "fast life." Issuing a manifesto, the Movement called for the safeguarding of local economies, the preservation of indigenous gastronomic traditions, and the creation of a new kind of ecologically aware consumerism committed to sustainability. On a practical level, it advocates a return to traditional recipes, locally grown foods and wines, and eating as a social event. Today, with a magazine, Web site, and over 75,000 followers organized into local "convivia," or chapters, Slow Food is poised to revolutionize the way Americans shop for groceries, prepare and consume their meals, and think about food. Slow Food not only recalls the origins, first steps, and international expansion of the movement from the perspective of its founder, it is also a powerful expression of the organization's goal of engendering social reform through the transformation of our attitudes about food and eating. As Newsweek described it, the Slow Food movement has now become the basis for an alternative to the American rat race, the inspiration for "a kinder and gentler capitalism." Linger a while then, with the story of what Alice Waters in her Foreword calls "this Delicious Revolution," and rediscover the pleasures of the good life.

2. Slow Food: The Case for Taste (Arts and Traditions of the Table: Perspectives on Culinary History)

4. Slow Food: The Case for Taste (Arts and Traditions of the Table: Perspectives on Culinary History)

5. Slow Food: The Case for Taste (Arts and Traditions of the Table: Perspectives on Culinary History)

6. Slow Food: The Case for Taste (Arts and Traditions of the Table: Perspectives on Culinary History)

Buchbeschreibung 2004. Zustand: NEW. 9780231128452 This listing is a new book, a title currently in-print which we order directly and immediately from the publisher. For all enquiries, please contact Herb Tandree Philosophy Books directly - customer service is our primary goal. Bestandsnummer des Verkõufers HTANDREE01137972

9. Slow Food: The Case for Taste (Arts and Traditions of the Table: Perspectives on Culinary History)