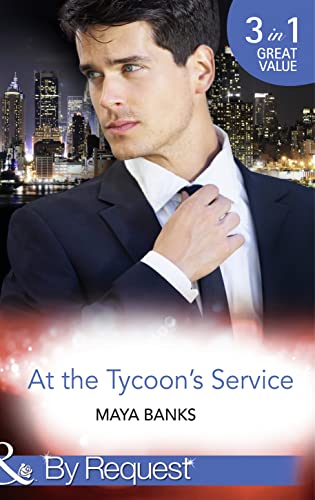 When hotel magnate Chrysander Anetakis found out his former mistress was pregnant and had amnesia, he grabbed his chance to sweep Marley Jameson away to his Greek island to await the birth of his baby... and enjoy her devotion...

Theron Anetakis had only one problem – and she just walked through his door. Because heiress Isabella Caplan has pined for Theron long enough... and now she plans to seduce the hot-blooded hotel tycoon and bring him to one knee!

When Jewel learnt the stranger she’d spent a night with was her new boss, she found herself unemployed, pregnant... and a wife-to-be! Because when he discovers Jewel is carrying his child... tycoon Piers Anetakis demands that they wed!

Maya Banks lives in Southeast Texas with her husband and three children. When she’s not writing, she loves to hunt and fish, bum on the beach, play poker and travel.

Escaping into the pages of a book is something she’s loved to do since she was a child. Now she crafts her own worlds and characters and enjoys spending as much time with them as possible.

Buchbeschreibung Paperback. Zustand: Very Good. The book has been read, but is in excellent condition. Pages are intact and not marred by notes or highlighting. The spine remains undamaged. Bestandsnummer des Verkäufers GOR006448770

Buchbeschreibung Paperback. Zustand: Good. The book has been read but remains in clean condition. All pages are intact and the cover is intact. Some minor wear to the spine. Bestandsnummer des Verkäufers GOR006352943

Buchbeschreibung Paperback. Zustand: Fair. A readable copy of the book which may include some defects such as highlighting and notes. Cover and pages may be creased and show discolouration. Bestandsnummer des Verkäufers GOR006655545

Buchbeschreibung Mills and Boon, 2015. Paperback. Zustand: Used; Good. **SHIPPED FROM UK** We believe you will be completely satisfied with our quick and reliable service. All orders are dispatched as swiftly as possible! Buy with confidence!. Bestandsnummer des Verkäufers 1946405

Buchbeschreibung Mills and Boon, 2015. Paperback. Zustand: Used; Good. **Simply Brit** Shipped with Premium postal service within 24 hours from the UK with impressive delivery time. We have dispatched from our book depository; items of good condition to over ten million satisfied customers worldwide. We are committed to providing you with reliable and efficient service at all times. Bestandsnummer des Verkäufers 1662102

7. At the Tycoon's Service

Buchbeschreibung Mills & Boon, 2015. Zustand: Good. This is an ex-library book and may have the usual library/used-book markings inside.This book has soft covers. In good all round condition. Please note the Image in this listing is a stock photo and may not match the covers of the actual item,300grams, ISBN:9780263252057. Bestandsnummer des Verkäufers 8187729