Verwandte Artikel zu The Dream of the Moving Statue

Gross, Kenneth The Dream of the Moving Statue

The Dream of the Moving Statue 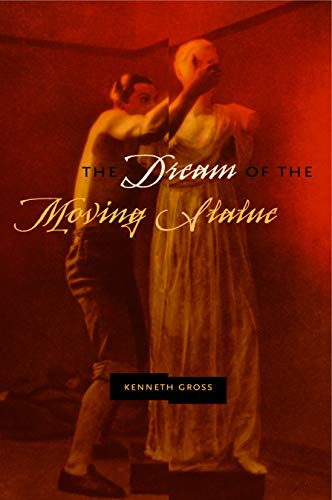 "Kenneth Gross conveys with acumen, passion, and originality the fascination that statues have exercised over the imagination since antiquity. His exploration of mythology and legends--from the petrifying stare of the Gorgon Medusa to the figure that comes to life when Pygmalion kisses his handiwork--reveals their psychological complexity and philosophical richness. Effigies, puppets, and replicas open up questions about reality and unreality, and lead us to consider the ontology of representations. Indeed The Dream of the Moving Statue, first published in l992 when computer simulations and virtual reality were still unfamiliar, was prophetic in its concerns." --Marina Warner, novelist, critic, historian, Professor in the Department of Literature, Film and Theatre Studies, University of Essex, author of Fantastic Metamorphoses, Other Worlds, and Phantasmagoria: Spirit Visions, Metaphors, and Media "After Hamlet in Purgatory--to name only one especially fine study intervening since The Dream was first written--Shakespeare's secularism is perhaps the one topic on which this very wide-ranging but fifteen-year-old book might be showing its date. Everywhere else its monumental insights seem fresh and vital and hugely deserving of reanimation by this elegant paperback reprint." --John Parker, Shakespeare Studies "Kenneth Gross's The Dream of the Moving Statue is by now a classic work of the literature on ekphrasis. Beautifully written and imaginatively organized, the book addresses the recurring human dream of animating stone through a range of works from the Hebrew Scriptures and classical mythology to 20th-century cinema. With great economy, Gross is able to discuss the relevance of this motif from myriad theoretical perspectives as well, considering, for example, not only a psychoanalytic interpretation of individual works, but also the role of a desire for animation in Freud's own methods and the recurring interest in stasis and movement in the work of Wittgenstein." --Susan Stewart, Princeton University, Professor and author of Poetry and the Fate of the Senses and Columbarium. "When statues come to life, when stony faces blush, when marble limbs gesture dramatically, we know that the artist's magic has taken hold of us. This wondrously uncanny, critically important story Kenneth Gross tells with irresistible wit and style, illuminating many puzzles of high aesthetic theory and common human experience." --Angus Fletcher, City University of New York Graduate School "Statues and their legends catch for us the gesture of life, life's animation. Kenneth Gross has drawn their story into a fascinating account of the human spirit, captured and brought to life as the sculptor animates recalcitrant stone. This is a brilliant, beautifully rendered account of art and vision, presented on the highest level of scholarship and intuition." --Angus Fletcher, City University of New York Graduate School "Kenneth Gross's moving statues book is one of the most stimulating discussions of sculpture and the aesthetics of statuary that I have ever read. It has had a significant influence on both literary scholars and art historians. Gross's book is beautifully wrought, highly suggestive, and deeply stimulating. It deserves to remain in print." --Paul Barolsky, University of Virginia "Exploring a perennial fascination with the idea an animated statue and its converse (petrifaction of living individuals), Gross both delights and instructs the reader through an exploration of a quite astonishing number of significant examples that include poetry, film, drama, psychoanalysis, and philosophy, to say nothing of a few famous statues themselves. The style is inimitable: graceful, sophisticated, and seductive in the display of a sensibility that is at once both unique and accessible. The few pages of the preface alone give a hint of the riches that lie within, continually provoking the reader with the exhilarating experience of new insights into the workings of the imagination, the arousal of fear and desire, and the dangerously porous borderlines between the inanimate and the animate, the object and the subject, and finally, between death and life." --Froma I. Zeitlin, Princeton University, author of Playing the Other: Gender and Society in Classical Greece

We live among the images we have made, and those images have an uncanny life. They seduce, challenge, trap, transform, and even kill us; they speak and remain silent. Kenneth Gross's The Dream of the Moving Statue offers a far-ranging and probing exploration of how writers, artists, and filmmakers have imagined the power and life of statues, real and metaphoric, taking up examples from antiquity to modernity, from Ovid, Michelangelo, and Shakespeare to Freud, Rilke, and Charlie Chaplin. The book is about the fate of works of art and about the fate of our fantasies, words, and bodies, about the metamorphoses they undergo in our own and others' minds.

1. The Dream of the Moving Statue -

2. The Dream of the Moving Statue