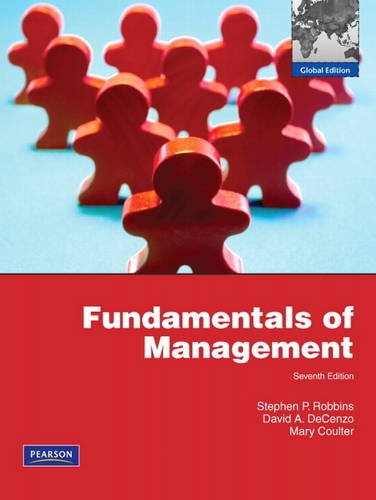 For Principles of Management courses. This Global Edition has been edited to include enhancements making it more relevant to students outside the United States The practical tools of management presented through in-depth practice. Robbins/DeCenzo is the best-selling, brief, paperback text that gives students more depth and breadth of practical tools to practice their management skills than any other textbook. New author Mary Coulter brings a fresh perspective to the already best-selling duo of Stephen Robbins and David DeCenzo. Accompanied by mymanagementlab! See the hands in the air, hear the roar of discussion be a Rock Star in the classroom. mymanagementlab makes it easier for you to be a Rock Star in the classroom by helping you hold students accountable for class preparation, and getting students engaged in the material through an array of relevant teaching and media resources.

Stephen P. Robbins (Ph.D., University of Arizona) is professor emeritus of management at San Diego State University and the world's best-selling author of textbooks in both management and organizational behavior. His books have sold more than 5 million copies and have been translated into 19 languages. Dr. Robbins is also the author of the best-selling The Truth About Managing People, 2nd ed. (Financial Times/Prentice Hall, 2008) and Decide & Conquer (Financial Times/Prentice Hall, 2004). In his "other life," Dr. Robbins actively participates in masters' track competition. Since turning 50 in 1993, he's won 17 national championships, 12 world times, and set numerous U.S. and world age-group sprint records. In 2005, Dr. Robbins was elected into the USA Masters' Track & Field Hall of Fame. In 2008, he set new world records for men age 65+ at both 100 and 200 meters. David A. DeCenzo (Ph.D., West Virginia University) is President of Coastal Carolina University in Conway, South Carolina. In his capacity as President, Dr. DeCenzo is responsible for the overall vision and leadership of the University. He has been at Coastal since 2002 when he took over leadership of the E. Craig Wall Sr. College of Business. Since then, the college established an economics major and developed an MBA program. During that period, student enrollment and faculty positions nearly doubled. The college also established significant internship opportunities locally, nationally and internationally in major Fortune 100 companies. As Provost, DeCenzo worked with faculty leadership to pass a revised general education core curriculum; as well as institute a minimum salary level for faculty members of the University. Before joining the Coastal faculty in 2002, DeCenzo served as director of partnership development in the College of Business and Economics at Towson University in Maryland. He is an experienced industry consultant, corporate trainer and public speaker. He is the author of numerous textbooks that are used widely at colleges and universities throughout the United States and the world. Dr. DeCenzo, and his wife Terri, have four children and reside in Pawleys Island, South Carolina. Mary Coulter (Ph.D., University of Arkansas in Fayetteville) - before completing her graduate work, she held different jobs including high school teacher, legal assistant, and government program planner. She has taught at Drury University, the University of Arkansas, Trinity University, and since 1983, at Missouri State University. Dr. Coulter's research interests have focused on competitive strategies for not-for-profit arts organizations and the use of new media in the educational process. Her research on these and other topics has appeared in such journals as International Journal of Business Disciplines, Journal of Business Strategies, Journal of Business Research, Journal of Nonprofit and Public Sector Marketing, and Case Research Journal. In addition to Management, Dr. Coulter has published other books with Prentice Hall including Strategic Management in Action, now in its third edition, andEntrepreneurship in Action, which is in its second edition. When she's not busy teaching or writing, she enjoys puttering around in her flower gardens, trying new recipes, reading all different types of books, and enjoying many different activities with Ron, Sarah and James, and Katie and Matt.