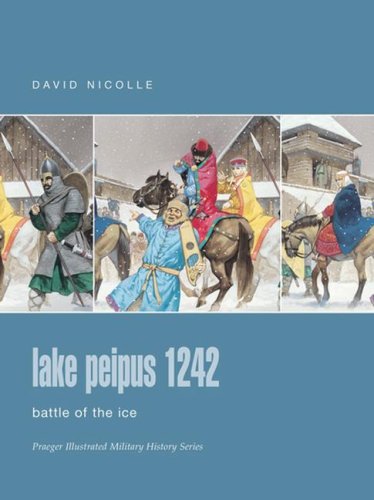 The battle of Lake Peipus took place in 1242 between the Teutonic Knights and the Russian city-state of Novgorod, led by its inspirational leader Alexandre Nevskii. The Teutonic Knights were a powerful military order, backed with the crusading zeal of Europe, the blessing of the Pope, and the support of the Holy Roman Emperor. The clash of arms around the frozen shores of Lake Peipus was immortalised in Eisenstein's epic film 'Alexandre Nevskii'. This battle, although little-known in the west, was important in the history of the medieval eastern crusades. As a result of the Teutonic defeat at the battle not only were the Crusaders forced to give back all the lands they had conquered in their Crusade against Novgorod, but also their defeat led to a new relationship between Catholics and Orthodox in the Baltic, with a new Pope, Innocent IV, trying to win over the Russians diplomatically rather than by military means. Finally, the battle also convinced a chastened Bishop Hermann of Tartu to accept the Teutonic Knight's priorities, which were to crush the pagan Lithuanians and to Christianise all the Baltic lands, rather than interfering in Russian affairs. David Nicolle's excellent book looks at the battle in detail and examines the Crusade against Novgorod of which it was a part.

DAVID NICOLLE worked in the BBC's Arabic service for a number of years before gaining an MA from the School of Oriental and African Studies, London, and a doctorate from Edinburgh University. He has written numerous books and articles on medieval and Islamic warfare, and has been a prolific author of Osprey titles for many years.

Buchbeschreibung Hardcover. Zustand: Good. Connecting readers with great books since 1972. Used books may not include companion materials, some shelf wear, may contain highlighting/notes, may not include cdrom or access codes. Customer service is our top priority!. Bestandsnummer des Verkäufers S_231237159

Buchbeschreibung Zustand: Good. A+ Customer service! Satisfaction Guaranteed! Book is in Used-Good condition. Pages and cover are clean and intact. Used items may not include supplementary materials such as CDs or access codes. May show signs of minor shelf wear and contain limited notes and highlighting. Bestandsnummer des Verkäufers 0275988414-2-4