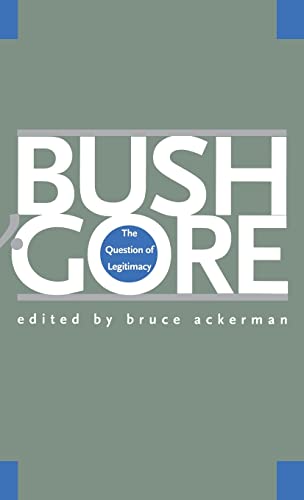 "The ideologically diverse commentators brought together by Bruce Ackerman to analyse Bush v. Gore offer a wealth of arresting and deeply-informed observations about an unprecedented case that will be passionately argued about for as long as the United States Supreme Court exists. In the library of commentary generated by the Supreme Court's decision, Bush v. Gore: The Question of Legitimacy is absolutely essential reading." Randall Kennedy, Harvard University

The Supreme Court's intervention in the 2000 election will shape American law and democracy long after George W. Bush has left the White House. This vitally important book brings together a broad range of preeminent legal scholars who address the larger questions raised by the Supreme Court's actions. Did the Court's decision violate the rule of law? Did it inaugurate an era of super-politicized jurisprudence? How should Bush v. Gore change the terms of debate over the next round of Supreme Court appointments? The contributors-Bruce Ackerman, Jack Balkin, Guido Calabresi, Steven Calabresi, Owen Fiss, Charles Fried, Robert Post, Margaret Jane Radin, Jeffrey Rosen, Jed Rubenfeld, Cass Sunstein, Laurence Tribe, and Mark Tushnet-represent a broad political spectrum. Their reactions to the case are varied and surprising, filled with sparkling argument and spirited debate. This is a must-read book for thoughtful Americans everywhere.

1. Bush vs. Gore: The Question of Legitimacy

3. Bush vs. Gore: The Question of Legitimacy